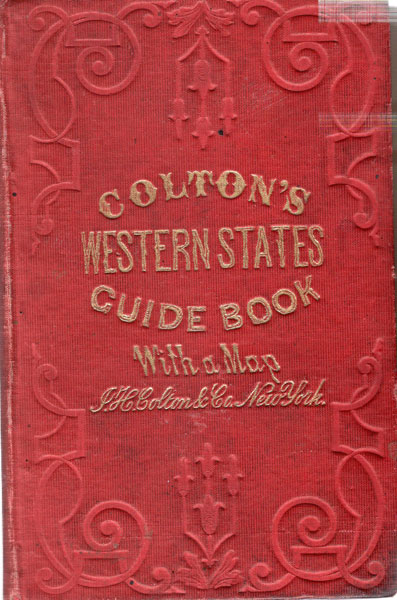 Colton's Traveler And Tourist's Guide-Book Through The Western States And Territories, Containing Brief Descriptions Of Each, With The Routes And Distances On The Great Lines Of Travel. Accompanied By A Map, Exhibiting The Township Lines Of The U. S. Surveys, The Boundaries Of Counties, Position Of Cities, Villages, Settlements, Etc

First edition. 6" x 3 3/4" original red, blind-stamped cloth, titles stamped in gold gilt on front cover, 99 (1) pp., plus 36 pp. of publisher's catalogue with hand-colored, folding map at rear, that opens to 22" x 24." The Western States here are Ohio, Michigan, Indiana, Illinois, Missouri, Iowa, Wisconsin, and the Territories of Minnesota, Kansas and Nebraska. The eastern portion of the Northwest Territory, Ohio, had by 1855 attracted some two million settlers, while Minnesota had only six thousand. The text and map cover all the crossroads and villages west of Pennsylvania, including way stops along the Oregon Trail between Independence, Missouri and Oregon. About half-way along that trail, another intersects, the route to Sacramento via Lake Truckee, site of the Donner Party tragedy. Canals in Ohio, Michigan, and Indiana are included in this guidebook. Provenance: Penciled on the front free-endpaper is the signature of H. Dunbar, foxing to the front and rear endpapers and the next few pages, map is lightly foxed at the outer fold else in fine, bright condition. Overall a very good copy.

Statistics And Information Concerning The State Of Nebraska, …
by H.C. [General Passenger And Ticket Agent Townsend