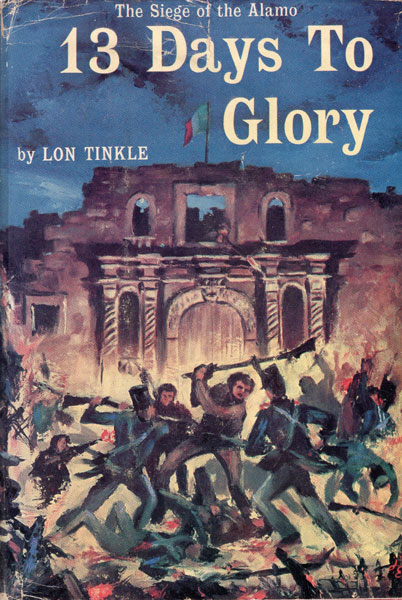 13 Days To Glory. The Siege Of The Alamo.

Other works by LON TINKLE

First edition. 8vo. Red and white boards, titles stamped in gold gilt on the spine, 255 [1] pp., acknowledgments, illustrated from photographs, epilogue, notes, principal sources, An Alamo Calendar. Long presentation inscription on the front fly leaf to Jeff Dykes, Western Americana author and historian, by the author in the year of publication. Laid-in are a review of the book by J. Frank Dobie; a review by Walter Prescott Webb and a picture of the Alamo. Reviewed on p.41 of A. C. Greene's, "The 50 Best Books On Texas." Most readable account of the Alamo. This is the story of the siege of the Alamo, when 183 determined men waited for reinforcements that never came. A meticulously detailed story of the stand made by a handful of American soldiers against the army of the ruthless dictator of Mexico, Santa Anna. "Mexican intrigue, the tangled skein of United States and Texan politics, the personal resentments of settlers and empire builders all entered the picture, as a segment of the Texas Volunteer Army waited in the half-ruined fortress mission of the Alamo. On February 23, 1836, Santa Anna's army appeared without warning, and a few civilians threw in their lot with the waiting soldiers. From the start the fight was hopeless; by March 6th it was over, when the Mexican broke through and slaughtered every soldier, sparing only civilian women and children. Jim Bowie, William Travis, Davy Crockett and 180 others were among the dead." A bit of offsetting to the front endpapers, else a near fine, bright copy in price-clipped dust jacket with light wear to the spine ends, corners, and extremities.