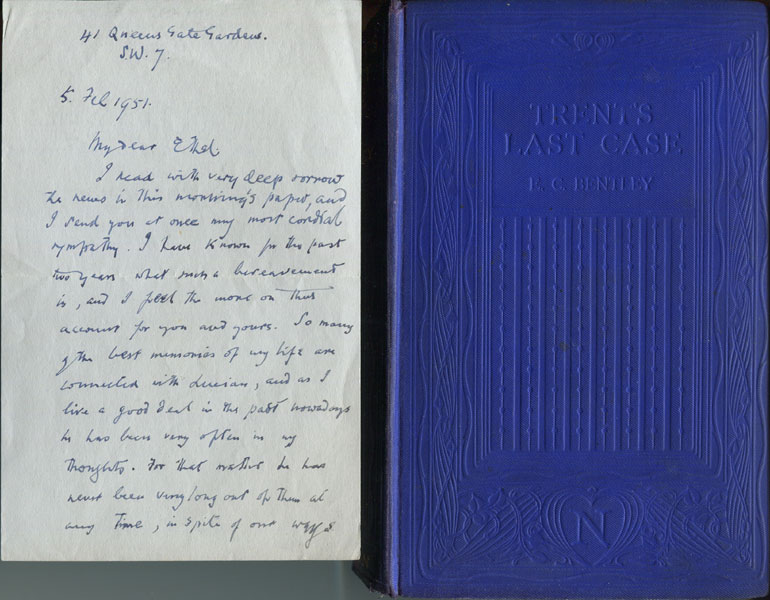 First edition. Former owner's signature on verso of front fly leaf and small bookseller's label at bottom of front pastedown sheet, else a very good, bright copy in the original blue cloth. A Haycraft/Queen Cornerstone title. Haycraft notes in MURDER FOR PLEASURE, (New York, 1941) page 118, that this book "... like every epochal work, must be regarded in its own historical spectrum to be fully appreciated. Its deceptive unremarkableness, in fact is the chief reason for its uniqueness in an era in which flamboyance and overwriting were the hallmarks of the crime novel.... TRENT'S LAST CASE stands truly first among modern examples of the genre." John Carter, among the earliest champions of detective fiction, called Bentley "the father of the contemporary detective novel." A society woman is accused of murdering her businessman husband. Called to piece the clues together is Inspector Trent, on the verge of retiring from detection. He learns that the dead man was a louse, providing the wife with plenty of motive. But, did she do it? Laid-in to this copy is an affectionate autographed letter signed from E. C. Bentley to Ethel Oldershaw ("My Dear Ethel") on the passing of her husband, Bentley's old school friend Lucian Oldershaw: 2 handwritten in ink pages, 8vo, London (41 Queen's Gate Gardens), 5 February 1951. "I have known for the past two years what such a bereavement is, and I feel the more on that account for you and yours. So many of the best memories of my life are connected with Lucian, and as I live in the past nowadays he has been very often in my thoughts. For that matter he has never been very long out of them at any time . . . In the days when we were together so much, his companionship and resourcefulness and immense fund of humour made an unforgettable impression on me. I cannot be with you tomorrow because I am confined to my bedroom with bronchitis, but I wanted you to know how I feel, and I am yours sincerely. E. C. Bentley." Lucian Robert Frederic Oldershaw was, with Edmund Clerihew Bentley (died 1956; his wife had died in 1949), one of a trio of friends at St. Paul's School; the third was Gilbert Keith Chesterton (died 1936). Oldershaw introduced Chesterton to Frances Alice Blogg, his future wife (they married in 1896; she died in 1938), and in 1902 Oldershaw married her younger sister Ethel Laura Blogg (died 1953).

Behind That Curtain.
by Earl Derr. Biggers