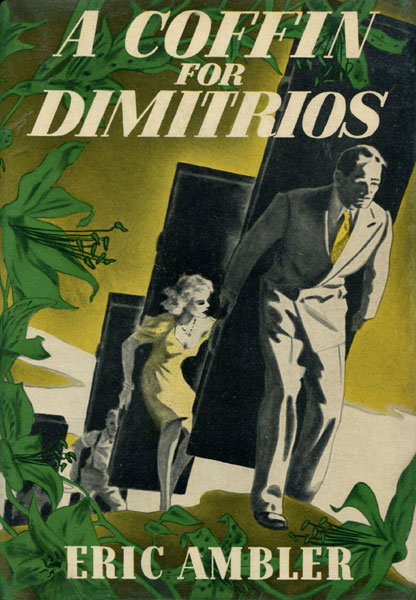 A Coffin For Dimitrios.

First U.S. edition. Near fine in an unusually bright dust jacket with none of the usual fading. Light professional restoration to spine ends, corners, and extremities. A Haycraft-Queen cornerstone title. A splendid story of espionage in which Dimitrios, a Greek fig-packer, has been hunted for two decades in most countries of central Europe as his name is involved with crimes of espionage, assassination, white slavery, drugs, and the like. Basis for the 1944 film directed by Jean Negulesco, with the story adapted for the screen by Frank Gruber, and starring Sydney Greenstreet, Zachary Scott, and Peter Lorre. A sharp collector's copy of a premier story of espionage.

Our Man In Camelot.
ANTHONY PRICE

The Fools In Town Are On Our Side.
ROSS THOMAS

He Could Not Have Slipped!
FRANCIS BEEDING