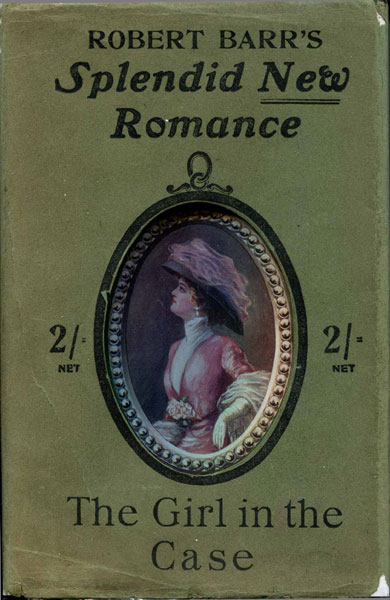 The Girl In The Case; Being The Manoeures Of The Inadvertent Mr. Pepperton

First edition, third impression. No American edition issued. In Hubin. Barr wrote the first Sherlock Holmes parody, and his 'The Triumphs of Eugene Valmont' was a Haycraft-Queen Cornerstone title. The jacket, which has a front-panel die-cut oval revealing the portrait of a girl on the cloth below, lists this title, 'The Girl in the Case', on the front flap as one of the 'Volumes To Be Issued Shortly' (July), so we are certain it is the first issue; it is also possible that the 'third impression' line on the title page of the book itself might have been added while pausing the printing process, a publisher's ruse of the time, designed to suggest sales were greater than they actually were. Near fine, bright copy in the original green cloth, titles stamped in gilt on the front cover and spine, with the onset color portrait of a girl to the front cover in a very good dust jacket with the spine a bit sunned, light wear to the spine ends and corners, and a few long closed tears held on the verso of the front cover with archival tissue tape. Pre-World War I British crime jackets are of the utmost rarity; this is one of literally a handful we can recall holding in twenty-five years. Story deals with a city newspaper, reporters, and murder.

The Corpse In Oozak's Pond
by Charlotte Macleod

A Choice Of Enemies.
by Ted. Allbeury