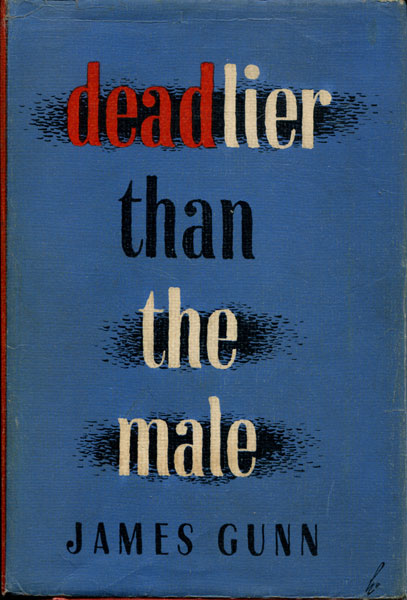 Deadlier Than The Male.

Other works by JAMES GUNN

First edition. Author's first and only mystery novel and his first book. Written by a senior at Stanford University, who was only twenty-one, the book seems to have an excellence of characterization, pace and dialogue not equaled by many of his older and more experienced colleagues. Cloth fine, bright and clean in dust jacket designed by Arthur Hawkins and with a trace of wear to the extremities. Basis for the film BORN TO KILL, produced in 1947, and directed by Robert Wise in the first of a number of noir films for which he became famous. The film starred Claire Trevor, Lawrence Tierney, Walter Slezak, and Elisha Cook, Jr. A man, while gambling in Reno, sees a girl friend out with another man and in a jealous rage kills them. The bodies are discovered in a boarding house by a tenant, Helen Trent, who does not report the murders because she is leaving town to return to her home. By chance, Helen meets the murderer on the train trip home and is attracted to him, but has no idea he's a killer. An exceptional copy.

In The Heat Of The Night.
JOHN BALL

Eye Of The Cricket.
JAMES SALLIS