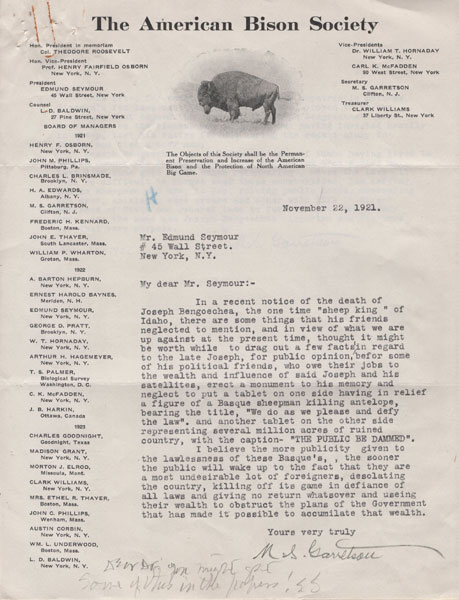 Signed Letter And Position Statement From The Secretary Of The American Bison Society. Martin S. Garretson, On The Destruction Of Wildlife Habitat In The West By Basque Sheepmen

First edition. Typed letter signed (two pages, the first on American Bison Society letterhead, dated November 22, 1921) and a one page typed statement, signed. All three pages with holes at upper left corner caused by removal of staples, one with a small tear at the same spot, one with a paper clip rust mark, else a very good group. One of the first environmental protection organizations in the United States, the American Bison Society was founded in 1904, by a group of sportsmen and conservationists among them Theodore Roosevelt and William S. Hornaday to help raise public awareness of bison and save them from extinction. Here the Society’s secretary, Martin S. Garretson, writes to its president, Edmund Seymour, urging that the recent death of Joseph Bengoechea, “the one time ‘sheep king’ of Idaho” be used as an occasion to alert the public to the destruction caused by sheep farming in the West. Clearly unconcerned about speaking ill of the dead, Garretson suggests sarcastically that those erecting a monument to Bengoechea add a plaque “on one side having in relief a figure of a Basque sheepman killing antelope, bearing the title ‘We do as we please and defy the law,’ and on the other side representing several million acres of ruined country, with the caption ‘THE PUBLIC BE DAMMED’[sic].” In a statement apparently written for the press, Garretson describes a region between Mountain Home, Idaho and Elko, Nevada that was “once covered with bunch grass waist high” that is “now ruined beyond reclamation for any purpose." Not only have the sheep ranchers allowed their flocks to over graze, but they “deliberately slaughtered every antelope, deer, sage grouse, and all other wild life that formerly inhabited this region, rendering it practically a desert of sage brush inhabited by lizards and horned toads.” Such efforts by the American Bison Society to raise awareness of the ill effects of habitat destruction (and other human activities) ultimately saved the majestic animal from extinction.

Map And Guide To The Great Serpent Mound, …
by W. H. Cole

Wildflowers Of The Texas Hill Country
by Marshall Enquist

Wyatt Earp In San Diego. Life After Tombstone.
by Garner A. Palenske