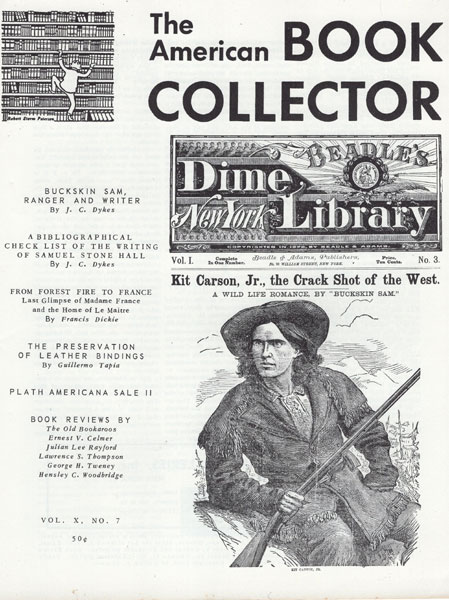 Buckskin Sam, Ranger And Writer; Or, The Life And Sub-Literary Labors Of Samuel Stone Hall

First edition. Quarto. Signed by the author. Printed wrappers, double-column, 32 pp., illustrated. Article appears in Volume X, Number 7, March, 1960, of The American Book Collector, pp. 8-14. Jeff Dykes tells of the life of Buckskin Sam, who realized his boyhood ambition and went West, became a Texas Ranger and a Confederate soldier on the Texas frontier, and his primary job had been Indian fighting. In 1877 Sam completed his first dime novel for Beadle, titled KIT CARSON, JR., THE CRACK SHOT OF THE WEST. He wrote a total of 51 dime novels for Beadle and even found time to write a few more for Beadle's competitors. Also included with this article is a fine bibliographical check list of the writings of Samuel Stone Hall. Near fine.

Apaches & Longhorns: The Reminiscences Of Will C. …
by Will C. Barnes

George Scarborough. The Life And Death Of A …
by Robert K. Dearment

The History Of Lake Linden, Michigan
by Clarence J. Monette