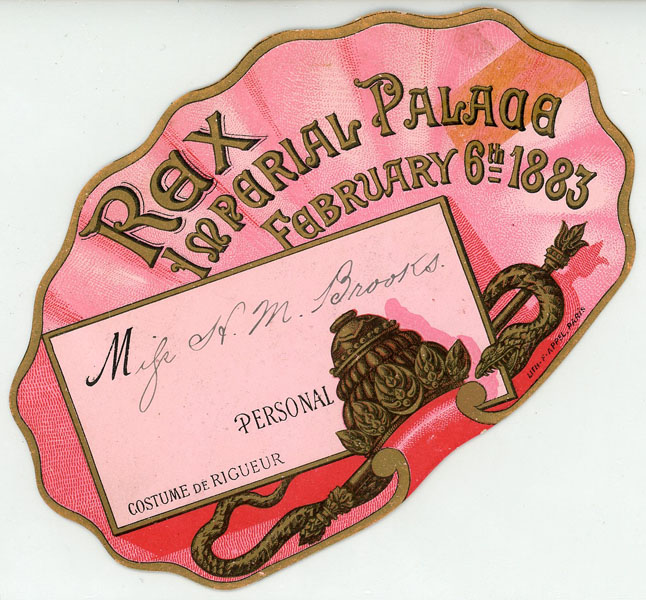 First edition. Single sheet of card stock, 3 1/4" x 5," die cut in a shell shape, color lithographed, primarily in pink & gold. Gold image of a mermaid & fish to verso. Invitee ["Miss H. M. Brooks"] inked to recto, in name block. In a desire to lure visitors and guests from other states by presenting a variety of gaudy pageants and especially one to appear during the daytime, a number of leading citizens decided to invite Rex, the Arabian monarch of joy and hilarity, to the Mardi Gras carnival. He would preside over the destinies of the day and rule as the democratic sovereign of pleasure and hospitality. His first visit was in 1872, attended by a body guard of Arabs. The grand duke Alexis was a guest of the city, and recognizing his cousin, Rex, reviewed the procession at the city hall, where the mayor surrendered to this foreign potentate the keys of the city with supreme control over its inhabitants for twenty-four hours, in order that joy might be unconfined. Each year the theme of the carnival would change. In 1883 the theme was “Atlantis: The Antediluvian World.” Atlantis, The Antediluvian World is a book published in 1882 by Minnesota populist politician Ignatius L. Donnelly. Donnelly considered Plato's account of Atlantis as largely factual and attempted to establish that all known ancient civilizations were descended from this lost land. The cards of invitation to the Rex Ball for the carnival of February 6, 1883, were in the shape of a clam shell and bore the inscription: "Rex Imperial Palace, February 6th, 1883. Costume de Rigueur.” Attendance at the Rex Ball is by invitation only. Each year a new Rex Ball invitation is designed featuring elements of the parade theme. These highly coveted invitations are requested by Rex members to send to their guests. Included with the invitation is one admit card for each person invited, which must be presented at the door of the Ball only by the person whose name it bears. In this particular case, Miss H.M. Brooks. Only light wear. Very good plus.