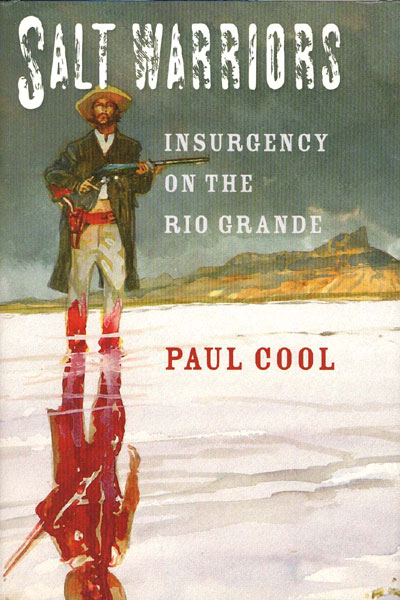 First edition. 8vo. Two-tone cloth and paper over boards, titles stamped in silver gilt on the spine, dark green endpapers, xvi [2], 360 pp., preface, acknowledgments, introduction, illustrated, portraits, maps, epilogue, notes, bibliography, index. Deals with the so-called El Paso Salt War of 1877. Winner of the 2007 Robert A. Calvert Book Prize. The local Mexican-Americans held common ownership of the immense salt lakes at the base of the Gudalupe Mountains since the time of the Spanish Empire and they believed the Treaty of Guadalupe Hidalgo confirmed their title. After the Civil War Anglos felt the area was up for grabs and an Austin banker staked a legal claim in 1877 enforced by his son-in-law. The ensuing popular uprising disrupted established governmental authority in El Paso for twelve weeks. Jerry Thompson in a promotional blurb on the rear cover says "..... an exceptionally well researched piece of scholarship that goes way beyond what has previously been written. It is obvious from the first page that Cool has made great efforts to uncover every piece of evidence that might in any way shed any new facts on this dramatic but bloody event." As new, unread copy in dust jacket.

Valley Of The Shadow.
by Brian. Garfield

Missoula, The Garden City Of Montana, Road Maps. …
by Chamber Of Commerce Of Missoula

Six Months In The Gold Mines: From A …
by E. Gould Buffum

The Story Of Ajax, Life In The Big …
by Alva J. Noyes