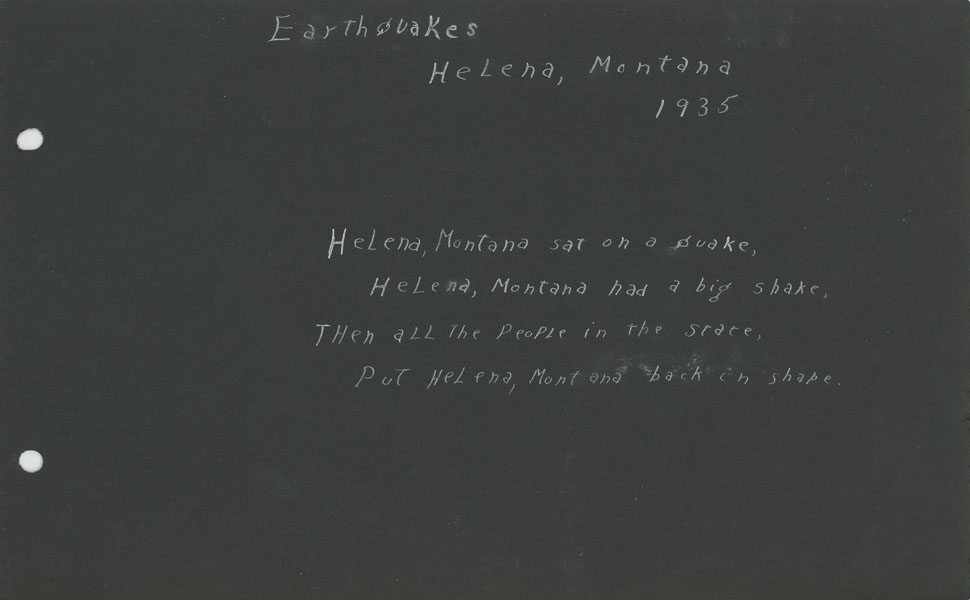 Photograph Album And Descriptive Letter Of The Helena, Montana Earthquake Of 1935

Other works by JOSCELYN, ARCHIE

On October 3, 1935 an earthquake shook Helena, Montana and made headlines across the country. The 23 photographs of this album speak for themselves and with two exceptions all are identified with inked captions. The photographs include images of Pizer's house, the destroyed new high school, Leibert's House, Hahn's House, the store, Kessler Brewery, scene of 2 deaths, Uneeda Bakery, gas station, Cooper's house, etc. Also there is a short poem written on one of the free photograph pages which is titled EARTHQUAKES - HELENA, MONTANA, 1935 "Helena, Montana sat on a quake, Helena, Montana had a big shake, Then all the people in the state, Put Helena, Montana back in shape." Many of the photographs are attributed to Knudsen Photography Studio. A most descriptive letter by Archie Joscelyn, of Helena dated November 24, 1935, provides excellent insight to the damage created by the quake. His letter in full : I have been intending to answer your letter for some time, and will do it now. It is a very nice day up here in Helena, sunny and warm, and if it wasn't for the quakes, it would be an ideal fall. The quakes, however, have a tendency to get on one's nerves. One came through a few minutes ago which sounded like a train on the roof, and there have been several quite hard shocks during the last week. Sunday school and church are scheduled to open again this afternoon, in the Presbyterian church. The public schools will not reopen before January 6th, if then. Business is much as usual in town with many homes being repaired, board siding in place of brick, etc. At that, the town has changed a lot since you were here. Hundred of homes, mostly brick, are totally demolished or otherwise uninhabitable. St. Paul's church will probably never be used again. The two depots were rather badly hit. Soon Main Street was largely wrecked. The house just up the street from Smoviers was ruined, and everywhere you go it is the same. Intermountain, I expect, is a thing of the past, after next spring. St. John's hospital was ruined and many others. Which isn't too cheerful a prospect. But it was a miracle that so few were killed and injured. For ourselves, and my folks, we have had little damage, aside from some cracked plastering and the chimneys broken off, broken dishes, etc. The house just back of us was ruined, and the school in front of my folks was completely wrecked. As to the sensation -- well, ordinarily there is a roar, a shaking, light or heavy. It isn't so bad except for the heavy ones. Then it is rather terrifying, when a house is shaken as you would shake a rat, and it keeps up for 5 to 30 second. On the last bad one, October 31st, I saw buildings toppling, vast clouds of dust, and our heavy stoves were slid around the floor like toys. But we are hoping -- everyone in Helena -- that they will quit some time, though they have rather been on the increase in number and intensity again of late. I understand, though there has been little said on this, that the quakes here record as second hardest known in the history of the country. Lack of fires and broken water mains has saved us from a far worse catastrophe. Even so, much of the twin has escaped with very light damage, the main business section being very lightly touched, as was the capital, etc. Please remember me to all your family, with kindest regards and best wishes fro a fine Thanksgiving. Archie Joscelyn. Archie Lynn Joscelyn was a native of Montana, being born in Great falls on July 25, 1899. He attended Intermountain Union College in Helena from 1921 to 1924, was a reporter for the Montana Record-Herald and the Helena Independent plus being a prolific and popular western plus being a prolific and popular western author. His story "TRAIL OF THE EAST WIND" appeared in the 1921 June issue of Overland Monthly. Includes transmittal envelope from Archie Joscelyn, 18 Cedar Street, Helena, Montana and addressed to Mr. John A. Dover, Doverdale Ranch, Buffalo, Montana. There are four leaves from a photograph album containing the 23 photographs with one photograph being loose. The photographs have fine contrast and the selection of photographs and the accompanying letter are in very good condition.

The Buffalo Soldiers. A Narrative Of The Negro …
WILLIAM H. LECKIE