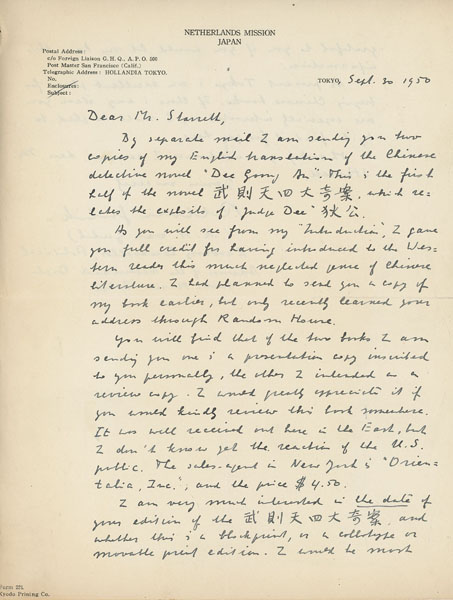 Two Robert Hans van Gulik Autograph Letters Signed "R H van Gulik." Two handwritten letters, 2 pages each, both measuring 8" x 10.5", Tokyo; dated September 30, 1950 and January 30, 1951. Written on Netherlands Mission letterhead and both addressed to Mr. V. Starrett. The letters concern van Gulik's publication of his English translation of the 18th century detective novel, Dee Goong An. The first letter, dated September 30, 1950, reads in part: "By separate mail I am sending you two copies of my English translation of the Chinese detective novel 'Dee Goong An'. This is the first half of the novel...which relates the exploits of 'Judge Dee'. As you will see from my 'Introduction', I gave you full credit for having introduced to the Western reader this much neglected piece of Chinese literature. I had planned to send you a copy of my book earlier, but only recently learned your address through Random House...I would greatly appreciate it if you would kindly review this book somewhere. It was well received out here in the East, but I don't know yet the reaction of the U.S. public. The sales-agent in New York is 'Orientalia, Inc.' and the price $4.50...At present Tokyo is an excellent place for buying Chinese books. If there is any item you are especially interested in, I shall be glad to try to find it for you here." The second letter, dated January 30, 1951, thanks Starrett for his review and explains his publication choices, in part: "Thanks very much indeed for your detailed review of Dee Goong An in the Chicago Tribune. Since you are familiar with the subject and the only Western co-worker in this field, your review has a quite special importance for me...The reason why I published the book myself is that two publishers I sent the MS to informed me that they could consider it only if the text were entirely re-written, so as to adapt it to the taste of the general public. I could not agree to this procedure which in my opinion is not in accord with scholarly principles. As it is, the book in its present form sold well, I have recovered the cost of publication with a nice margin for increasing my library!..." Van Gulik is best known for his historical detective novels and stories centered on Judge Dee, published between 1949-1968. He also wrote nineteen newspaper comics about Judge Dee, which were published from 1964-1967. Vincent Starrett (1886-1974), was among the more versatile talents to grace the world of detective fiction. One of his major contributions to the mystery genre are his Sherlock Holmes writings including "The Unique Hamlet" which is generally considered the best Holmes pastiche. He was a studious critic and reviewer of detective literature, and he contributed substantively to the library of mystery fiction. Letters have faint fold creases else very good copies.