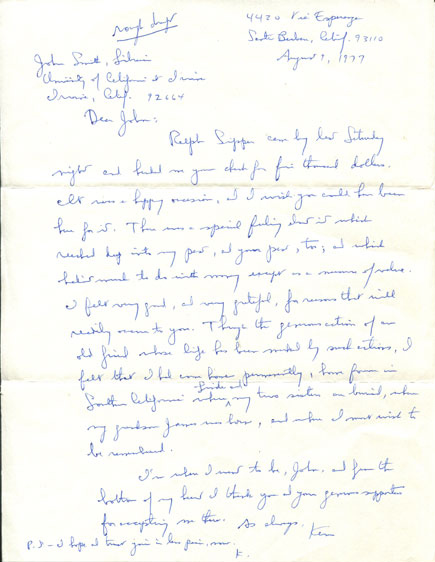 A One-Page Handwritten Letter. A Rough Draft As Noted By Ross Macdonald

Written to John Smith, the Chief Librarian at the University of California at Irvine dated August 9, 1977, and a rough draft as noted by Macdonald. The letter reads as follows: "Dear John, Ralph Sipper came by last Saturday night and handed me your check for five thousand dollars. It was a happy occasion, and I wish you could have been here for it. There was a special feeling about it which reached deep into my past, too; and which hasn't much to do with money except as a measure of value. I felt very good, and very grateful, for reasons that will readily occur to you. Through the generous action of an old friend whose life has been marked by such actions, I felt that I had come home permanently, home forever in Southern California where Linda and my two sisters are buried, where my grandson James was born, and where I most wish to be remembered. I'm where I want to be, John, and from the bottom of my heart I thank you for your generous support for accepting me there. As always, Ken. I hope and trust you are in less pain now." No further comment is called for since this historic letter speaks for itself. The payment made by the University of California Library was for the first of the author's manuscripts to repose there. After his death, the bulk of Macdonalg's papers was acquired by the library. Fine.

Rather Be The Devil
IAN RANKIN