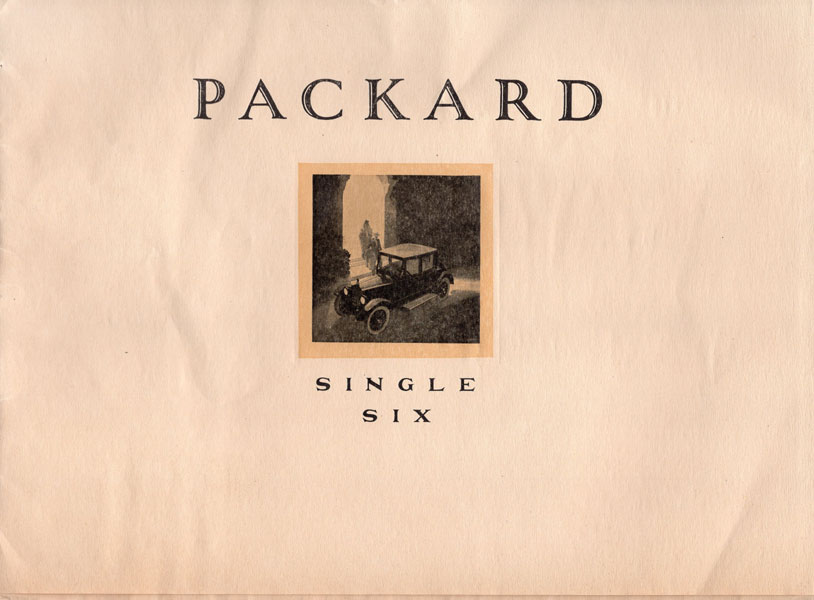 First edition. 8 1/4" x 11" oblong, string-tied, pictorial wrappers, 8 pp., text in double column, illustrated. Packard Single-Six is offered in four models, the Touring car, the Runabout, the Coupe, and the Sedan. Each vehicle is pictured along with mechanical features and specifications. Packard's flagship vehicle during the 1910's and 1920's was the Twin Six and it was a very popular vehicle with those who could afford it. To stimulate sales, generate additional revenue, and to boost production, Packard created a scaled-down version, offered at a lower price, called the Single-Six. It was introduced in the fall of 1920 and it was comprised of an engine that that half the cylinders of its twin-six counterpart. The introduction called for a new car that was lighter, more maneuver-able, without sacrifice of flexibility. Packard's answer was the Model 116 Single Six with a 116-inch wheelbase, produced in four body styles with a price range of $2,350 to $3,350. This sleek automobile of compact dimensions had a six-cylinder, L-head engine that developed over 54 hp and met the needs of motorists. Though this was an opportunity for more of the public to own a Packard, then Packard President Macauley and his board of directors were shocked to find that the Single-Six had not met sales expectations. In the post-War era, the economy had entered a depression, resulting in slow sales throughout the industry, and Packard being left with half of the Single Six models produced, unsold, and taking up space in dealer inventory. During this time period the company's Twin-Six automobile continued to be preferred by the Packard customer. A fine, clean copy complete with the original mailing envelope.

A Virginian In New Mexico.
by John Rowzee Peyton

How To Put The Win In Windows
Dennison Manufacturing Co.