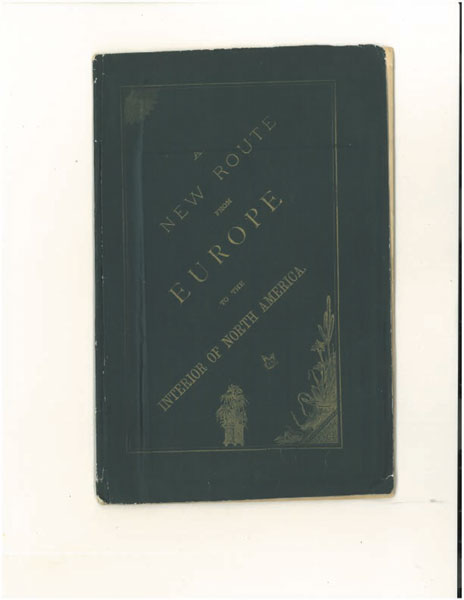 A New Route From Europe To The Interior Of North America, With A Description Of Hudson's Bay And Straits

Other works by Canada-North America

First edition. Printed wrappers, 19pp. Large colored folding map - 32.5"W x 17.5"H. "Issued by the Nelson Valley Railway and Transportation Company of Montreal," this report contains "the latest information with regard to the route via Hudson's Bay and Straits to the great North-West." The report states that "during the present and the past seasons...a corps of surveyors engaged in laying out a railroad from Lake Winnipeg to the harbor of Churchill on Hudson's Bay, and this survey is sufficiently advanced to prove that the line is practicable and indeed easy of construction." The report continues that "Churchill harbor is excellent...it is in the very heart of the continent...within 400 miles of the great wheat and cattle raising territories under the British flag, and within fair reach of the northern portions of those in the United States." Stating that Churchill is closer to Liverpool than Montreal or New York, the report continues: "Why, it may be asked, has this route remained so long unused and ignored? The answer is: for the same reasons which have until now kept the fertile lands of the North-West unsettled and imperfectly known. The Hudson's Bay Company have until lately held the whole of the North-West as a hunting ground for its Indians, and the interest of that company lay in discouraging settlement or intrusion on its domain." The report goes on to describe in detail the practicality of the development of this route, the merits of this route versus the established options, and the benefits of the development of the Canadian and United States regions of the interior of North America. The map is large and very detailed, spanning in longitude 155 degrees West to 15 degrees East and latitudes of 85 degrees to 25 degrees North, a huge area showing much of North America, the Atlantic Ocean, the British Islands, and much of western Europe. Produced by the Burland Lithograph Company of Montreal, various areas are shown in 4 colors and the route from Liverpool to Churchill, and further overland to Dakota is in red. All natural features are shown and identified. Also shown are Canadian Provinces, several U.S. states, cities, a few railroads, telegraph lines, forts, trading posts, and many other features. The handsome map is nearly fine. The map is entitled: "Map of the Dominion of Canada, Shewing the Extent and Situation of its Public Lands, Also its Geographical Relation to the British Islands." The wrappers show some minor edgewear and a short 1/2" internally taped reinforced tear to top edge of rear wrapper, else a very good or better copy, clean and complete. A very scarce-rare work intended to promote a unique route for British settlement and development of the northern plains in Canada and the United States.

Incidents In The History Of Dublin. Gathered From …
MRS SARAH CATHERINE LATTIMORE