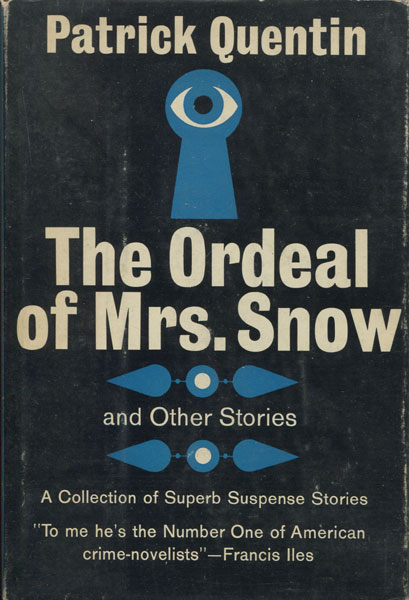 First U.S. edition. Fine in very lightly rubbed dust jacket with light wear to spine ends and corners. THE ORDEAL OF MRS. SNOW was the winner of the Edgar Award in 1962. The story also is a Queen's Quorum title. Queen's Quorum 119. In 1964, THE ORDEAL OF MRS. SNOW was filmed for television as an episode of THE ALFRED HITCHCOCK HOUR. This book is a collection of one novelette and 11 short stories. The collection contains an assortment of chilling stories about children who perpetrate hideous crimes without the slightest sense of guilt or remorse ... The schoolboy who finds an ideal way to deal with his irritating father; the child who planned murder because of his unhealthy love for his mom; the child who murdered for greed and then framed an innocent man for the crime. And then there are adults who plan evil crimes and are frequently the victims of their own schemes.

The Make-Believe Man.
by Elizabeth. Fenwick

The Death And Life Of Bobby Z.
by Don. Winslow

Once Upon A Pond
A.B Guthrie, Jr

The Machine In Ward Eleven.
by Charles. Willeford