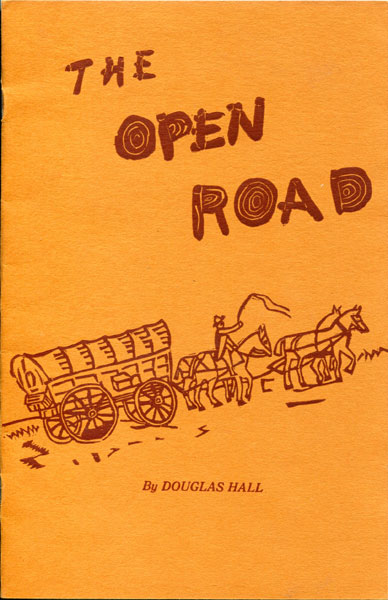 First edition thus. 8vo. Original pictorial, orange, stapled wrappers, [2], 20 pp., illustrated with two original photographs, preface. This story was first published in the Danville Gazette newspaper in June 1944, and told the story of five men who left Lizton at noon on September 8, 1878, for Texas. Their first encounter was with 200 red-shirted miners near Seelyville "who were either drunk or crazy or both. The street was filled with them, and they were fighting, and the language used was lurid, to say the least. Without warning, the mob attacked us with clubs, bottles and rocks, but thanks to the heavy canvas on our wagons we were not hurt." He describes Indian Territory: "In one valley there were teepees as far as the eye could see, all occupied by blanketed Indians..... You could not tell a squaw from a buck, as they dressed just alike." Then his description of Texas: "North Texas was to us about the most lonesome spot on the earth. After going through Dennison and Dallas, we would travel a whole day over the rolling hills without seeing a person or a house." After all the encounters they did trade for a large farm in Brazos County. Includes a supplement by C. N. Hickman who was also on the trip. A very scarce and privately printed account. Noting on the title page: "Duplicated in purple ink." Fine copy.

When Law Was In The Holster. The Frontier …
JOHN BOESSENECKER

Portland And The Pacific Northwest
Portland Immigration Board