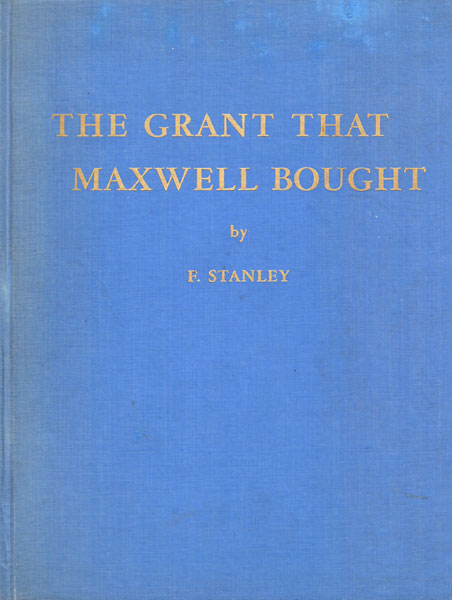 The Grant That Maxwell Bought.

Other works by STANLEY, F.

First edition. Quarto. Limited to 250 copies of which this is copy 106. Signed by Father Stanley. Original blue cloth, gilt stamping on front cover and spine, [8], 256 pp., foreword, numerous illustrations from old photographs, bibliography, double columns, map in pocket at rear. An outstanding work, the author's first book, and is the rarest of works by Father Stanley. A thoroughly researched history of the Maxwell Land Grant, a vast tract of land comprised of almost 2,680 square miles in New Mexico and Colorado. Rather than rely on heresay, Stanley examined historic documents and court records, forming an interesting history of this vast and controversial tract of land. Includes much information on the towns, the railroads, Indians on the grant, Lucien Maxwell, Carlos Beaubien, Guadalupe Miranda, Gov. Manuel Armijo, Gen. O. P. McMains, Clay Allison, and many others. In his foreword Stanley says, "Because of this bit of land a Supreme Court Justice almost lost his life; a president of the United States wanted to horse-whip a man; a minister was looked upon as a killer; a cattle man became a killer; vigilantes rode into the night burning and killing; and the Anti-Grant War was waged in two states taking more lives than the Lincoln County War that brought Billy the Kid his fame." "This limited edition was immediately sold out and is now very rare. In a long chapter on Clay Allison the author tries to correct some of the legends about that notorious gunman."--Ramon Adams. Herd 2149 says "Rare." Lightly sunned on the spine else fine, bright, tight copy housed in a cloth slipcase with leather spine label and titles stamped in gilt. A bright, attractive copy of an elusive book.