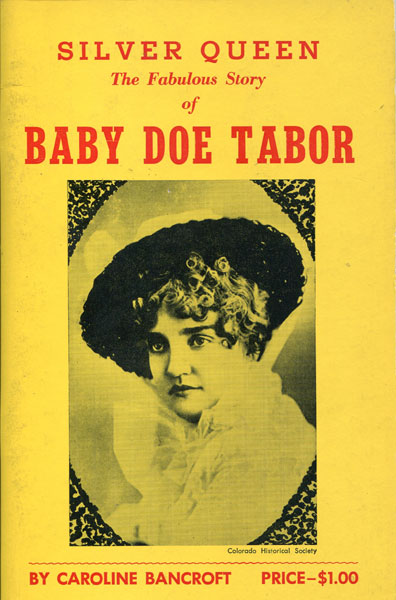 Other works by CAROLINE BANCROFT

First edition. 8vo. Signed by the author on the half-title page. [8], 76 pp., foreword, postscript. The fabulous and tragic story of Baby Doe Tabor, wife of Jim Tabor, the Silver King. "At one time the 'best dressed woman in the West,' for the final three decades of her life, she lived in a shack on the site of the Matchless Mine, enduring great poverty, solitude, and repentance. During her lifetime she became the subject of malicious gossip and scandal, defied Victorian gender values, and gained a 'reputation of one of the most beautiful, flamboyant, and alluring women in the mining West.' Baby Doe died destitute and penniless in 1935, yet during the 1880s she had been one of the richest people in the United States. The author was a prominent citizen of Colorado and wrote a number of books and articles, including "The Unsinkable Molly Brown," the story of a socialite who gained fame at the time of the sinking of the Titantic. A newspaper article dated 10-9-85, is laid-in and provides a brief biography of the author's life, former owner's bookplate else a very good copy of a book that is scarce in the first edition..

Out Of Doors In Colorado
Colorado And Southern Railway

Letter From The Valley Camp Coal Company To …