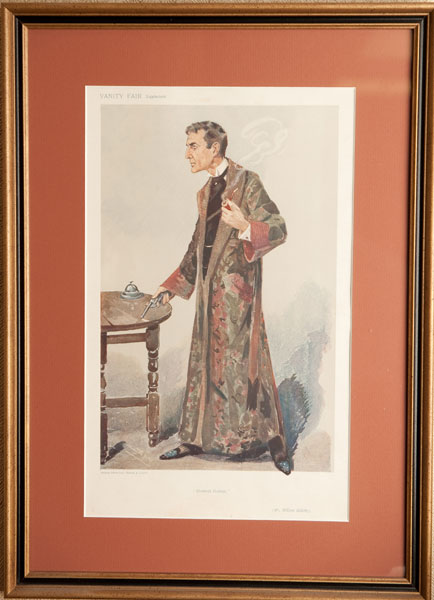 Other works by ARTHUR CONAN DOYLE

8 1/2" x 13 3/4" color print of William Gillette in a portrayal of Sherlock Holmes. For many decades, Vanity Fair magazine issued a series of caricatures drawn by "Spy," the most famous caricaturist of his day. These large, full-color prints were published as "Supplements" to the magazine. These high quality prints have been heavily collected for the past century. While the vast majority of the prints were of political figures, there were scores of judges, doctors, literary figures and other celebrities, including actors. This print of William Gillette was made during the height of the actor's fame, which rested largely on his portrayal of Sherlock Holmes, which he did for more than 30 years. Gillette was the model for the Frederic Dorr Steele's portraits of Holmes, ranked second only to Sydney Paget's portrayals of Holmes for THE STRAND magazine. Some years ago, the original steel engravings for many of the "Spy" prints were discovered and new prints were made. While they look quite similar, they are valued at about one-half the price of the originals. These reprints are accompanied by a history of VANITY FAIR SUPPLEMENTS and give other indications of being of recent vintage. This print is, of course, the original, approximately a century old. Matted and framed to a 13 1/2" x 19" size and in fine condition.

The Revenge Of The Hound.
MICHAEL HARDWICK