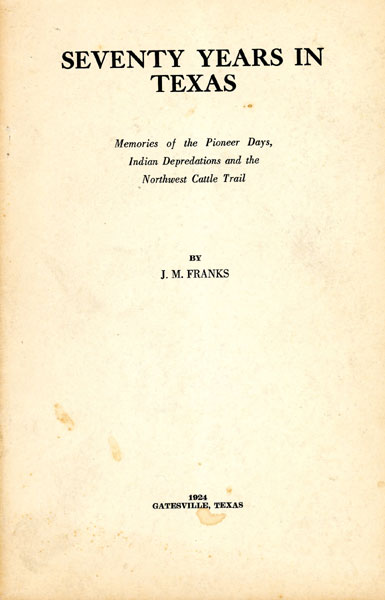 Seventy Years In Texas. Memories Of The Pioneer Days, Indian Depredations And The Northwest Cattle Trail

First edition. 8vo. Original printed wrappers, 133 [1] pp., frontis., preface. Life on the Texas frontier, cattle drives, ranching, Indian raids, etc. Indians of Texas 2370 says, "A rare item ... Franks presents his memoirs of life in North Central Texas from the 1850s through the end of the frontier era as if relating the story in a taped interview ... It is concerned with pioneer families, their hardships, and their constant problems with Comanche and Kiowa raiders. Most of these persoalized stories are not found in any other sources." Herd 839 says "Scarce." Six Guns 759 says "Scarce." Also information on the depredations during the Civil War years by outlaw jayhawkers as well as Indians. Also some information on Phil Coe and Wild Bill Hickok. Lightly soiled on the front cover, perimeter of the covers uniformly tanned, else a near fine copy.

The Way To Rainy Mountain
by N. Scott Momaday

The Environment Of A Writer
by Buddy Mays