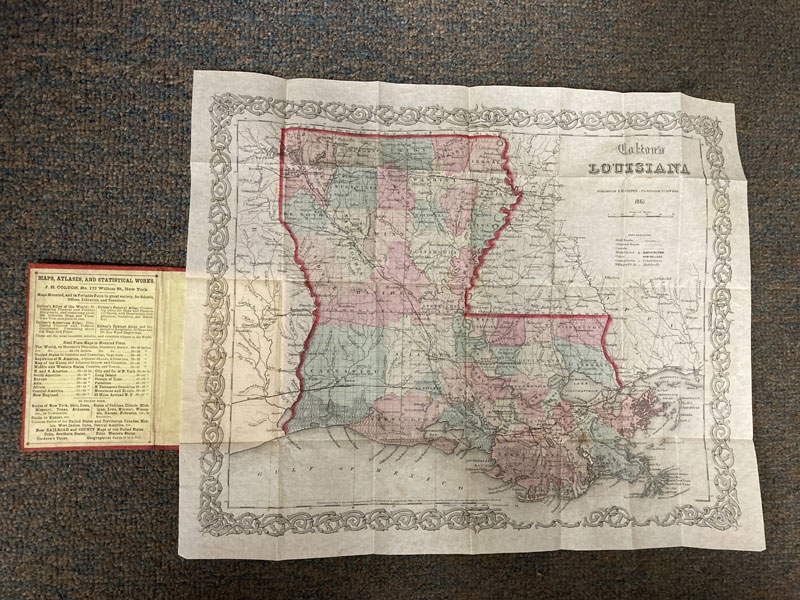 Folding map, 32 x 40 cm [12 5/8" x 15 3/4"] bound-into original decoratively embossed red cloth boards with title stamped in gilt on the front cover. An extremely attractive map of the State of Louisiana as it appeared in 1861. While the map was published in 1861, it is printed at the bottom edge: "Entered according to Act of Congress in the Year 1855." The map is quite detailed, showing individual counties and townships, though townships are not named. Counties are hand-colored in shades of green, yellow, pink, and orange. State boundaries are highlighted in bright pink. Bodies of water are located and named such as Lake Ponchartrain, the Mississippi Sound, the Lau Breton Sound, the Gulf of Mexico, and the Mississippi River. The legend, placed on the right-hand side of the map, explains markings for railroads, common roads, canals, the State Capital (Baton Rouge), the City of New Orleans, other cities and towns such as Franklinton, and Villages and P. O. Boxes. The western portion of Mississippi and the eastern portion of Texas are named. Original hand-coloring, mild foxing, miniscule separations at a few folds, decorative border with edges and corners crisp with no chips, else a near fine, bright copy. Not in Phillips.

The American Indian Parfleche, A Tradition Of Abstract …
GAYLORD TORRENCE

Record Of Engagements With Hostile Indians Within The …
LT. GEN PHILIP H. SHERIDAN