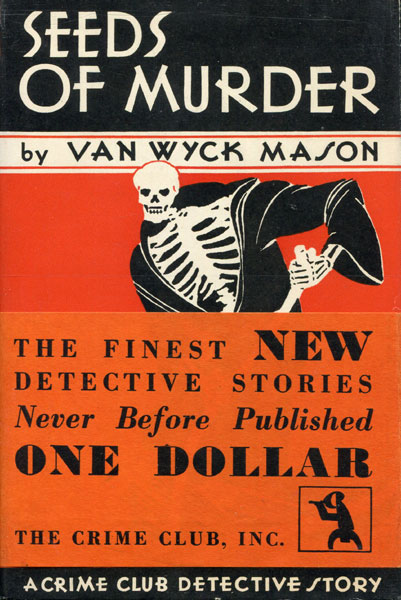 First edition. Author's first book. Faint erasure on the first blank leaf, else a fine copy in a fine, bright dust jacket complete with the original promotional wraparound band. During a Long Island house party, Mr. Wallace was found hanging from a hook in the bathroom. There was a note in his hand that told the world of his concerns, and how it was useless to go on with life. But a few things didn't seem quite right, why was the sheet on which the note was written shorter than all the other sheets on his desk? Where had the three seeds that looked like tomato seeds come from that were found near the body, and why had Mr. Wallace chosen the house party evening as the time to commit suicide? Captain Hugh North, late of the American Intelligence Service, saw these things and they puzzled him. Later in the evening another death occurred and again the three white seeds followed in the victim's wake, as a symbol of death. Crime Club title that introduces Captain Hugh North. An exceptional copy.

A Rope For The Hanging.
by Nigel. Morland

Blood Will Have Blood.
by Linda J. Barnes