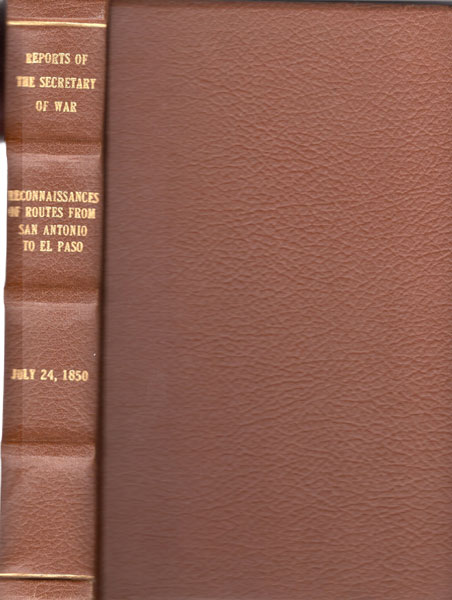 First edition. 8vo. 31st Congress, 1st Session, Senate Executive Document No. 64. Pebbled faux leather, titles stamped in gold gilt on the spine, raised bands, 250 pp., 72 plates (25 in color) with plates 2, 21, & 39 not issued as stated by Howes J164, illustrated, plates, maps. The two large folding maps are present. Map #1 is entitled, Reconnaissances of Routes from San Antonio de Bexar to El Paso del Norte. Map #2 is entitled, Map of the Route Pursued in 1849 by the U.S. Troops under the Command of Bvt. Lieut. Col. Jno. M. Washington, Governor of New Mexico, in an Expedition against the Navajos Indians. The maps illustrate the tracks of the expeditions that opened up West Texas to American settlement. An important report for its role in the opening of travel and settlement in West Texas and New Mexico. The many handsome plates are related to Simpson's surveys of New Mexico. Howes J 164 says "Contains among other reports, R. B. Marcy's (on his route from Ft. Smith to Santa Fe) and J. H. Simpson's (on his Navajo country expedition)." Basic Texas Books 111 says "This is a valuable compendium of government explorations that led to the opening of West Texas to travel and settlement." A clean, square copy in near fine condition in a handsome modern binding.

The Kid's Last Night, And Other Stories Of …
JAMES STEVEN PETERS