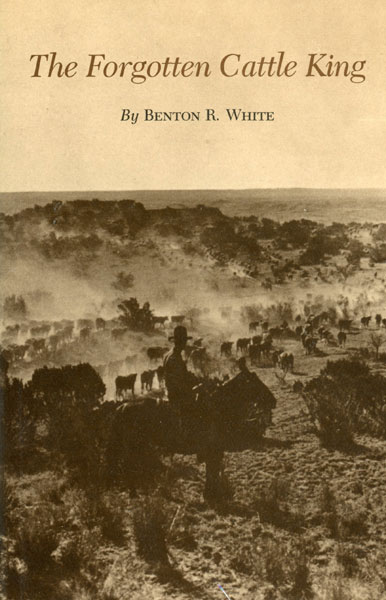 Other works by BENTON R. WHITE

First edition. 8vo. Cloth, titles stamped in gilt on the spine, xviii, 138 pp. acknowledgments, prologue, illustrated [mostly from photographs], portraits, maps, footnotes, epilogue, postscript, appendix, selected bibliography, index. Fountain Goodlet Oxsheer, at nineteen, became the head of his family. With the cotton economy in shambles, he teamed up with some of his neighbors and took a herd of cattle “up the trail” to Abilene. Oxsheer wisely used his profits to buy more cattle. He would serve as sheriff of Calvert cleaning up that rough railroad town. Oxsheer moved his family west of Colorado City acquiring several hundred thousand acres of rangeland and establishing the Lazy Diamond ranch. He became an important figure in the Texas ranching, pioneering the breeding of longhorns to Hereford stock. Ultimately, his empire would be ruined by the ravages of the Great Depression. Minor foxing to the fore-edges else a fine copy in dust jacket.