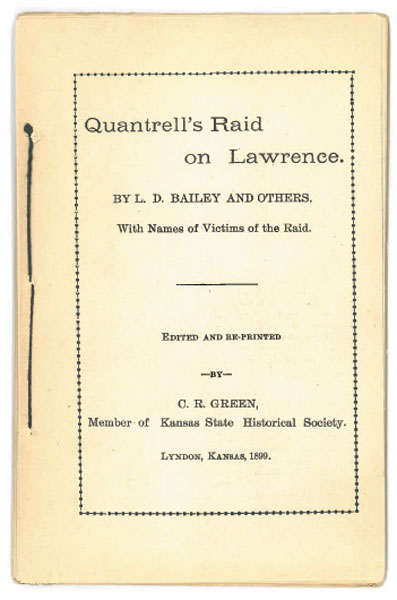 Quantrell's Raid On Lawrence. By L. D. Bailey And Others. With Names Of Victims Of The Raid

Other works by GREEN, C. R.

First Edition. Sewn Self-Wrappers. 52pp. A detailed account of this notorious raid on Lawrence, Kansas during which many citizens were killed and much of the town was destroyed. At dawn on August 21, 1863, Williams Quantrill and his guerrillas rode into Lawrence, where they burned much of the town and killed or seriously wounded between 160 and 190 men and boys. This raid was the culmination of an ongoing conflict between the Free-State forces who controlled Lawrence and the pro-slavery partisans who lived in nearby Missouri. In August 1863, the Union commander along the border, General Thomas Ewing, arrested several wives and sisters of members of a notorious band led by William Quantrill. This gang of outlaws had scorched the region, terrorizing and murdering Union sympathizers. On August 14, the building in Kansas City, Missouri, where the women were being held collapsed, killing five. Quantrill assembled 450 men to exact revenge. The army headed for Lawrence, Kansas, long known as the center of abolitionism in Kansas. The raiders rode at night, entering Lawrence about 5 a.m. They burned buildings, looted stores and massacred men and boys, staying in Lawrence for about four hours before riding off. Women and girls were spared. Near fine.

A History Of Texas Artists And Sculptors
FRANCES BATTAILE FISK