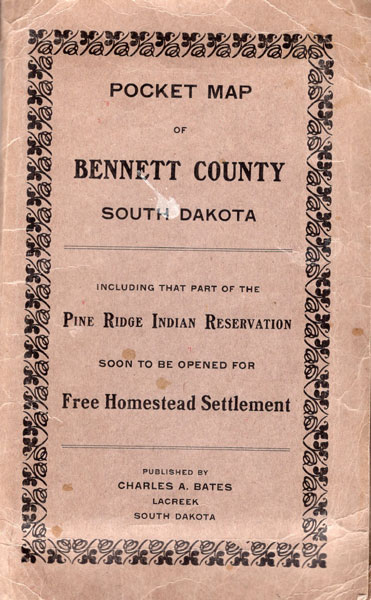 Pocket Map Of Bennett County South Dakota. Including That Part Of The Pine Ridge Indian Reservation Soon To Be Opened For Free Homestead Settlement

by Charles A Bates

First edition. 8vo. Printed pocket wrappers that holds a pocket map which folds out into a 24" x 36" map of Bennett County, South Dakota. First edition of this remarkably scarce land promotional plat map documenting the lands appropriated from the Ogalala Sioux Pine Ridge Reservation under the Manypenny Agreement, and the Indian General Allotment Act (Dawes Act of 1887). Bennett County was carved from these lands as of 1909, and the town site of Lacreek was created, and the map shows the railroads already completed, proposed railroads, timber and open lands, with key geographical details noted. The plat map also carefully notes the lands held by the Ogalala Sioux tribe members including Constance Long-Bear, Hari Woman, Abner White Calf, Hunkapaps, Kills-in-Timber, Alice Bear Robe, and many others. The Interstate Land Company's promotional pitch on the inside of the front cover touts the tremendous returns for settlers on the Rosebud Indian Reservation lands that were opened previously, and that "the onrush of settlers, and extension of railroad lines into this new empire of wealth points out the easy path to independence. To secure the best bargains, come early." Charles Ash Bates (1880-1937) at the time this map was issued was a self-employed surveyor and Assistant Allotment Agent on the Pine Ridge Indian Reservation, who originally began work as a clerk with the Cheyenne River Agency Reservation in 1900. Claude L. Harvey (1871-1936) was a station agent for the Chicago & North Western Railroad, as well as real estate agent for the Interstate Land Company based out of Lacreek, South Dakota and Merriman, Nebraska. Benjamin Roberts (1863-1937) was a U. S. Navy veteran and rancher based out of Merriman, Nebraska, who had joined with Harvey in the Interstate Land Company venture. Some offsetting from old cellophane tape expertly removed by a master paper conservator and a few minor repairs at some crease fold points, else a very good copy.

A Glimpse Of Manitou Springs, Colorado, And A …