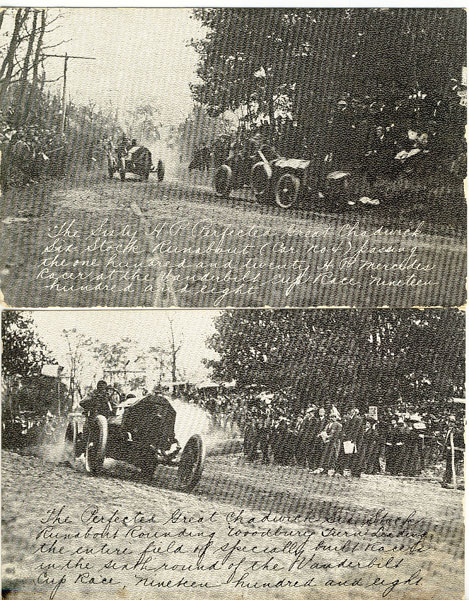 3 1/2" x 5 1/2" black and white postcards. First postcard states, "The Sixty H.P. Perfected Great Chadwick Six Stock Runabout (Car No. 4) passing the one hundred and twenty H.P. Mercedes Racer at the Vanderbilt Cup Race, nineteen hundred and eight." The second postcard states, "The Perfected Great Chadwick Six Stock Runabout Rounding Woodbury Turn leading the entire field of specially built Racers in the sixth round of the Vanderbilt Cup Race, nineteen hundred and eight." The No. 4 car was driven by William Haupt. He finished 10th. There was a Magneto problem on lap 7, and the car was running in lap 9 when the race was called. The Mercedes shown in one of the postcards was No. 3 car, driven by Emil Stricker. He finished in 6th place. Three weeks after the 1908 Vanderbilt Cup Race, Stricker was killed in a racing accident. Both postcards have light wear to the extremities, are not stamped, nor addressed. Very good.