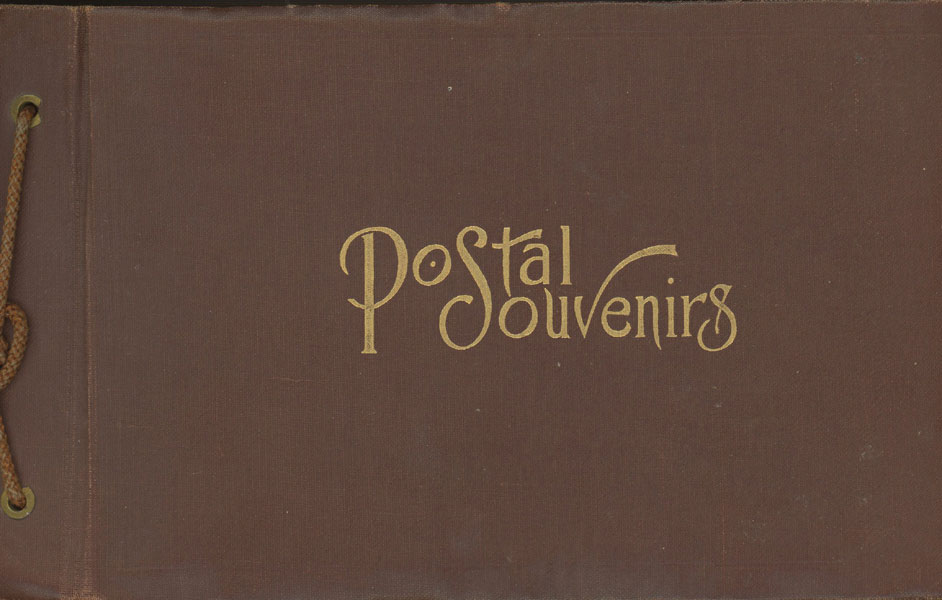 Oblong. 9" x 5 1/4" x 2." in contemporary limp brown cloth post-binder, gilt lettering stamped on front cover. [94] pp. on thick gray paper stock. 93 silver gelatin photographs tipped-in, sized 4 1/2" x 6 1/2" to 5" x 7," nearly all with identifying text and/or photographer’s mark at lower fore-edge within the negative. Many sepia-tinted. An intriguing photo album filled with 93 silver gelatin images recording hikes and climbs in Spray Park National Forest and trail connected to Crater Lake (Mowich Lake) on the western edge of Mount Rainier National Park, logging in the Kapowsin timberlands, private cabins, wildflowers, Spray Falls, and other scenery. This uncommon photo album vividly portrays the stunning Spray Park, Spray Falls, Eagle Point, Mount Rainier National Park, and environs, as well as encompassing the majority of the known images of this long forgotten Washington photographer. The album opens with images of a private cabin in Spray Park, and the logging road which later served as the road for visitors traveling up the Carbon River to the Mount Rainier National Park, Spray Park, and Mowich Lake. Also included are many images of the Spray Park Falls, the resplendent meadows of subalpine wildflowers, exceptional views of Mount Rainier, and glaciers on Mount Rainier. Of particular interest are photographs showing logging by the Kapowsin Lumber Co., a division of the St. Paul & Tacoma Lumber Co. which had purchased the Kapowsin timberlands from the Northern Pacific RR, with one photo showing a Shay locomotive, steam donkey, and rigging, while another shows a choker rigging attached to giant cedar log with loggers trimming off the ends. Still another final photo in the album shows the end of the logging railroad, and siding for loading downed logs. Other photos show a variety of seasons, private cabins tucked into the Spray Park, climbers and hikers, and one photo showing two young girls holding a rifle, presumably Louise & Rose Hessong, aged 12 and 11 at the time the photos were taken for this album. Old Kapowsin was originally built near Orting, Washington, and located right on Kapowsin Lake featuring mills, a Tacoma Eastern Railroad connection, bars, and even a school of 280 students, along with pedestrian walkway on pilings connecting the town and loggers to the house of prostitution on an island in the Lake. When the timber largely ran out in the 1920s, the mills closed, and Tacoma Public Utilities purchased the original town site intending it for a reservoir. Hessong (1858-1919) was a commercial photographer originally from Ohio, who by the early 1900s had set up a studio in Kapowsin, Washington, which apparently operated until his death. He also was an inventor who filed a patent for a soap holder in 1916, receiving in 1917. We could find no institutional holdings of Hessong photographs. Rubbing and edgewear to covers along with minor bumping and wear to corners. Two photos removed. Very good.

Echoes Of The Past, Pioneers Of San Juan …
by Catherine Davis

Hegel, The Turner Hypothesis, And The Safety-Valve Theory
by W. Stull Holt