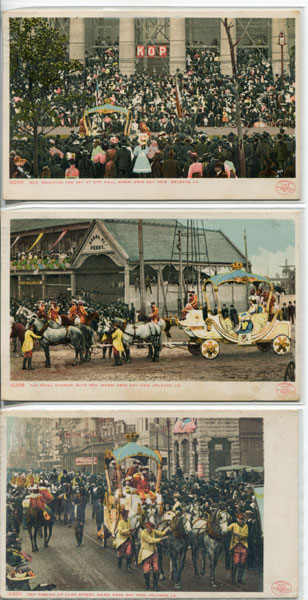 Each of the six postcards measures 3 1/2" x 5 1/2." Beautiful color scenes include "Rex" Passing Up Camp Street; The Royal Chariot with "Rex;" "Rex" Receiving the Key at City Hall; 2 - The "Rex" Pageant, which show two different scenes; and The Arrival of "Rex." Rex (founded 1872) is a New Orleans Carnival Krewe which stages one of the city's most celebrated parades on Mardi Gras Day. Rex is Latin for "King", and Rex reigns as "The King of Carnival." "Rex was organized by New Orleans businessmen in part to put on a spectacle in honor of the New Orleans visit of Grand Duke Alexei Alexandrovich of Russia during the 1872 Carnival season, as well as to increase tourism to the city. One member of the Rex Organization is each year chosen to be the monarch of the organization. The identity of Rex is made public on Lundi Gras, the day before Mardi Gras. Rex is always a prominent person in the city, one who is usually involved in several philanthropic and civic causes. Being chosen Rex is one of the highest civic honors a person can receive in New Orleans. The Mayor of New Orleans traditionally hands over a symbolic Key to the City of New Orleans to Rex for Mardi Gras Day. A consort is also chosen each year for Rex, and she is titled the 'Queen of Carnival.'. The queen is always a debutante of the current season. Like Rex, the queen is chosen in the spring of the previous year, and must keep her identity secret until Lundi Gras." All 6 postcards are addressed to Elizabeth A. Halliday in New York City and postmarked March 4, 1907. The is light soiling and light wear to the extremities of the card from being handled during mailing. A very nice collection.

The History Of Copper Harbor, Michigan
by Clarence J. Monette