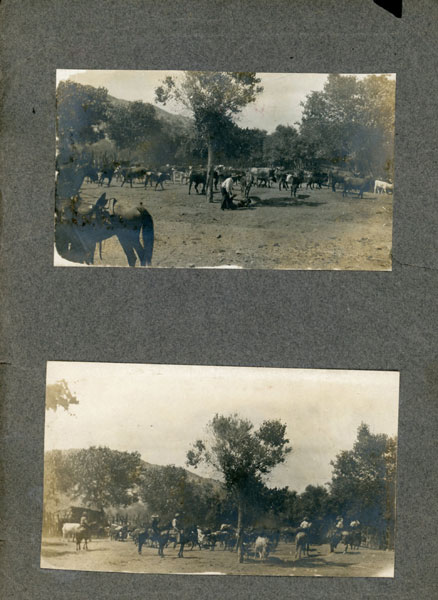 An evocative group of eighty-nine photographs capturing the lively scene in Bisbee, Arizona in the early twentieth century, centering on the life of cowboys, miners and ranchers in the area. There are 89 silver prints (approx. 2' x 2' to 4' x 5'), mounted on gray album leaves including 7 hand-tinted prints. This archive documents life in and around Bisbee during the city’s boom period. Founded as a copper, gold, and silver mining town in 1880, Bisbee was incorporated in 1902, and by 1910 boasted a population of over 20,000 people and was the largest city between St. Louis and San Francisco. The photographs included here picture cowboys on horseback; shooting guns and (mockingly) pointing guns; posing atop large rocks; shaking hands, and so forth. In one image a cowboy holds a young boy (possibly his son) in one arm while the boy holds onto a tree and a small rifle. This same boy appears in another photo toting a rifle and riding a donkey. Other scenes picture ranch life, showing men tending to the livestock, butchering animals, etc. Several close-up portraits and group shots of cowboys and ranchers are included. Signs in one town view read "Bisbee Miner" and "City of Bisbee." The archive is rounded out by shots of miners and the Bisbee mining scene; camping and hunting scenes; and shots from around Arizona. Pictured are miners lunching on a bench; a man standing outside his tent with an American flag flying above; three slain rabbits propped up next to a rifle; scenic views; miners and scenes of mining operations; ranchers or cowboys playing music on a porch; shots of villages; a large mining operation; one shot of two men posing with guns and a bottle of whiskey in a cave with a rebus sign that reads, "Drink Old [illustration of a crow] at the State[?]." A few shots picture railroad cars of the Atchison, Topeka and Santa Fe Railway. Two photos appear to show Apache wickiup dwellings. Also pictured are rodeos where numerous people have gathered to watch. One image shows a photographer with a gun pointed at him taking a photograph of a cowboy. Following a push in the 1910s by Bisbee miners to organize for better work conditions and pay, the Phelps Dodge Corporation ... the area's major mining company ... used private police and deputized sheriffs in 1917 to forcibly relocate over 1,000 striking miners to Tres Hermanas, New Mexico. Seeking to prevent unionization, the Corporation alleged the workers were members of the radical, Socialist-affiliated Industrial Workers of the World. The workers were warned to never return to Bisbee. The population of Bisbee declined broadly throughout the twentieth century, dropping to 3,800 by 1950. By 1974, ore reserves were depleted and in 1975 the Phelps Dodge Corp. brought to a halt its Bisbee copper-mining operations. "During almost a century of mining, 8 billion pounds of copper, 102 million ounces of silver and 2.8 million ounces of gold along with millions of pounds of zinc, lead and manganese were produced." ... discoverbisbee.com. A valuable photographic document of the Bisbee, Arizona scene. Some moderate wear, soiling and rippling to a few photographs; a few photographs trimmed along one edge, else very good condition.

The Last Cowboys. Closing The Open Range In …
CONNIE BROOKS