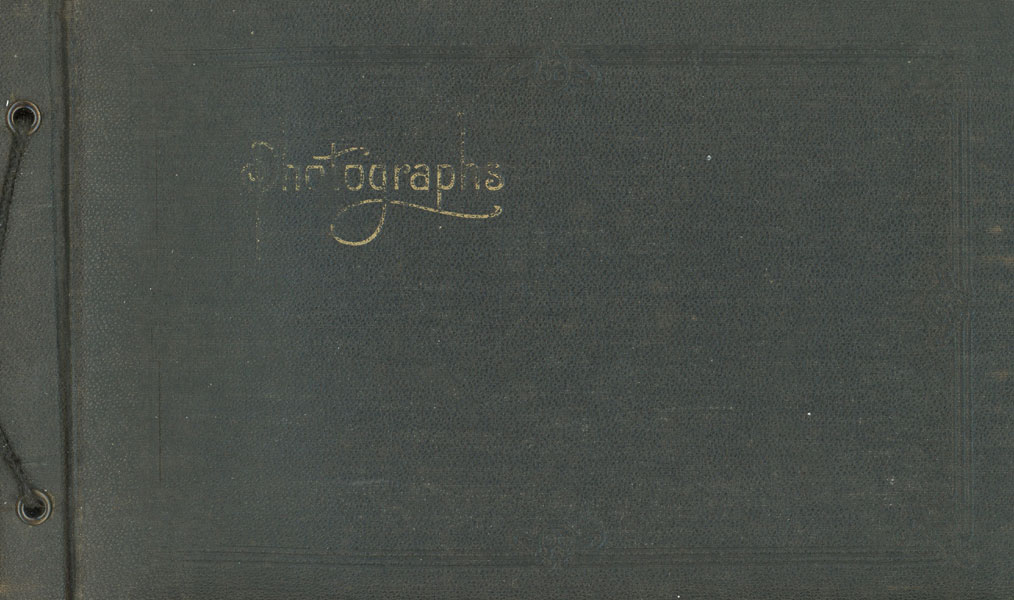 Photograph Album Documenting The Exploration And Surveying Of The White Chuck Mountain Cinder Cone, Glacier Mountain, And Thornton Lake, As One Of The Earliest Such Expeditions For Establishing The Cascade Crest Trail From The Canadian Border To The Columbia River, 1929

Oblong. 11 3/4" x 7 1/2" x 2" in contemporary pebbled black cloth post-binder, sewn with black silk braid at gutter margin. Gilt lettering stamped on front cover along with embossed borders. [100] pp. on thick black paper. 100 silver gelatin photographs all mounted throughout, sized 5" x 7," nearly all with text within the negative, or in neat pen at lower blank margin, and all signed either by Ellis or Cleator. The U.S. Forest Service group travels first by rail car and then by horseback through the rugged North Cascades, stopping at Kennedy Hot Springs, White Chuck Valley, Lake Byrne, views of the White Chuck Cinder Cone, White Pass, Glacier Peak, White River Glacier, and Johnson Mountain. This exceptional photo album provides an essential visual record for one of the earliest U.S. Forest Service recreation and conservation expeditions to establish the Cascade Crest Trail [Pacific Crest Trail] through the Cascade Mountains from Canada to the Columbia River in Washington State. Fresh from his historic survey of the Olympic National Forest from 1927-1928, Cleator was directed to survey and explore the rugged White Chuck Mountain Cinder Cone area, considered the most beautiful North of Lassen in California, offering access to the astonishing Glacier Peak wilderness and famed for its exceptional wildflower displays in Spring and Summer. The album opens with the group piled onto a River Lumber Co. locomotive, followed by views of camping and trekking through massive old growth cedars in the White Chuck Valley with stops at Camp Creek, Kennedy Hot Springs, and onto Lake Byrne. The photos encompass views of a Lean-to cabin at Glacier Peak, views of Glacier Peak, the White Chuck Cinder Cone, Red Pass, views of Mount Rainier from Red Pass, a Sheep Herder's Cabin at White Pass, and a panorama of the Cinder cone. Together with camp scenes, making meals, fishing, there are also views of Mountain Goats on White Pass, the White Chuck Glacier, White River Glacier, Johnson Mountain from Indian Pass Trail, Indian Lake, Reflection Lake, and the giant old growth cedars at Sloan Creek. As a colophon, Ellis has included a self-portrait of him wearing the portable dark room pack on his back with a photo entitled "The Man Who Made the Pictures." Cleator (1883-1957) was a Pacific Northwest forester and conservationist instrumental in the federal government's efforts to survey, establish, regulate, and protect National Parks, Forests, and trail systems from poachers, rogue logging and mining operations, and other users of public lands. He was one of the first US Forest Service's recreational engineers, and developed the guidelines for private summer homes in the region's National Forests. Many hiking guides and references to the North Cascades list 1934 as the earliest surveys and explorations of the White Chuck Cinder Cone for recreational hikes and climbing, but this album's photos are clearly dated August, 1929. Ellis (1894-1983) was a well known commercial photographer in Arlington, Washington, who was well known for his efforts to promote tourism to the North Cascades and the Puget Sound area, and also well known climber. His business focused on tourism postcards, and real photo postcards, and later named his company, The Ellis Post Card Company. See: J. Boyd and Clifford B. Ellis Photographs, University of Washington Libraries, Special Collections, PH0530 (Should be noted that none of the negative numbers in this collection of images appears in the detailed descriptive list). Minor shelf wear and rubbing. Still near fine with all images retaining bright strong contrast.

Reflections Of The Past As It Rolled Along.
ZEKE TAYLOR

Papers And Testimony In The Case Of W. …
W. A BURLEIGH