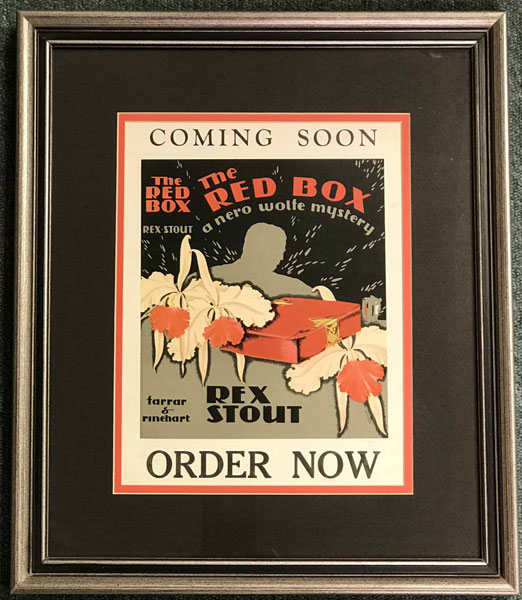 [Stout, Rex]. Original publisher's mock-up by Winfred Earl Lefferts, for advertisement of Rex Stout's forth Nero Wolfe novel. Signed as "Lefferts." Beautifully executed in post-deco style. Original publisher's mock-up for advertisement of the fourth Nero Wolfe novel by Rex Stout. The mock-up utilizes a silkscreen print of artist-designer Winfred Earl Lefferts' jacket art against white board with a tiny "Printed in the USA" logo at the bottom left. Wolfe is portrayed in silhouette (as was the tradition on the first few jacket designs), a mug of frothing beer to his right, with a red box lying amidst the great man's orchids. Art size is 8 1/2" x 11." Attractively and archivally double-matted, in a beautiful 19" x 17" wooden frame. Wikipedia says, "Winifred Earl Lefferts (October 9, 1903, Newtonville, Massachusetts – November 1995, Blandford, Massachusetts), also known as Winifred Lefferts Arms, was a painter, designer and philanthropist. A member of the Lefferts family, early settlers of Brooklyn, she studied and exhibited art, and designed for New York book publishers prior to her 1937 marriage to Carleton Macy. Following her marriage to Robert A. Arms in 1952 she painted as Winifred L. Arms. After the death of her second husband she became known for philanthropy and for founding a private residential treatment center in Carmel, New York, named Arms Acres. The daughter of Oscar Leffert Lefferts and Winifred Wood, Winifred Earl Lefferts was born into a socially prominent family. Her mother was descended from Francis Fauquier, Colonial lieutenant governor of Virginia, and Major Nathan Peters of Connecticut, aide to General George Washington. Through her father Lefferts was descended from Oliver Wolcott, one of the signers of the Declaration of Independence; Matthew Griswold, governor of Connecticut; and Pieter Lefferts, an early Dutch settler of Brooklyn. Winifred Lefferts studied at the Pratt Institute Art School and the National Academy of Design in New York. She won a fellowship from the Louis Comfort Tiffany Foundation in 1925, and received prizes from the National Arts Club in 1931, 1933 and 1936. She held membership in the National Association of Women Painters and Sculptors, the New York Watercolor Club, the American Watercolor Society and the Allied Artists of America." "Lefferts illustrated books and designed dust jackets for American book publishers in the 1920s and 1930s. Books that credit her as illustrator include Elaine Sterne Carrington's The Gypsy Star (1928) and Laura E. Richards' 1935 book of children's verses, Merry-Go-Round. Lefferts' name or her distinctive "W.E.L." signature appears on many book jackets, including the U.S. edition of W. Somerset Maugham's The Casuarina Tree (1926), DuBose Heyward's Angel (1926) and M. P. Shiel's Dr. Krasinski's Secret (1929). She designed covers for Rex Stout's How Like a God (1929) and Seed on the Wind (1930), and for three of Stout's early Nero Wolfe novels ... The League of Frightened Men (1935), The Rubber Band (1936) and The Red Box (1937)." Very fine condition.

A Wilderness Of Mirrors.
TED ALLBEURY

All Our Tomorrows.
TED ALLBEURY