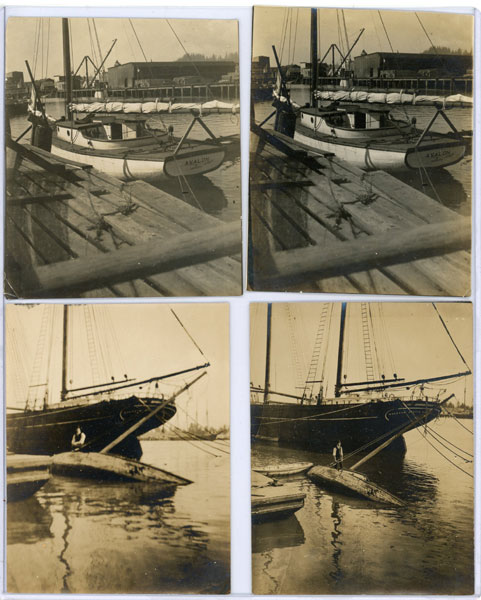 Seven Photographs Showing The 35' Sailboat "Avalon" Before And After Being Wrecked At Its Moorage In Aberdeen, Washington Harbor

This collection of seven photographs shows the sailing sloop "Avalon," built and based in Aberdeen, Washington, and owned by "Harry" before and after it's demise. Seven silver gelatin photos. 1 - 6.1/8" x 8" mounted on 9" x 11" studio board, embossed gray ruling, with photographer's stamp in lower right corner of board, manuscript marine architecture drawings of the hull of the Avalon, and cost. Six 4" x 5" silver gelatin photos, three with pencil manuscript captions on versos. The largest of the seven images is a splendid photo taken by Colin MacKenzie, an intrepid Nova Scotia logger who apprenticed with Charles Pratsch after being injured during the 1903 Aberdeen fire. The photo shows the sloop under sail with captain at tiller, two men standing near the mast, and the Aberdeen sawmill in the background. After MacKenzie was tragically killed by John Turnow, the famed Wild Man of the Wynoochee, most of his prints and negatives were given to Pratsch, and Alexander "Jerry" Girard. Three of the smaller photos show the Avalon at moorage and under sail, two show the sloop capsized with caption "Harrys boat wrecked in a freshet torn from moorings" under the stern of the lumber Schooner William Renton. The William Renton Schooner was a 447' lumber schooner built as part of the fleet operated by Captain William Renton, lumber and shipping baron in Port Blakely, Bainbridge Island, Washington. Edgewear and wear to corners along with crease at center of the large photograph. Slight curling to remaining photos. Very good.

The Trail. A Cattle Drive From Corsicana, Texas …
by B. G. Mckie