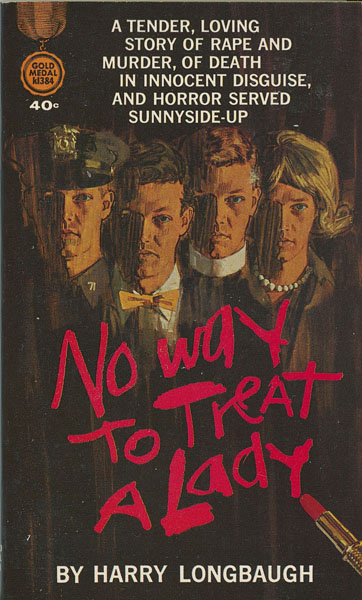 No Way To Treat A Lady.

Other works by HARRY LONGBAUGH

First edition. A paperback original. Gold Medal k1384. The author, William Goldman, using the pseudonym of Harry Longbaugh, which is the name of the Sundance Kid, the partner of Butch Cassidy of the notorious Wild Bunch. A crafty serial killer plays a game of cat-and-mouse with a harried police detective, who is trying to track him down. Christopher Gill is a psychotic killer who uses various disguises to trick and strangle his victims. Morris Brummell is a single and harassed New York City police detective who starts to get telephone calls from the strangler and builds a strange alliance as a result. In 1968 it was made into the Paramount movie of the same name that starred Rod Steiger as Christopher Gill, and George Segal as Morris Brummell, with Lee Remick, Eileen Heckart, Murray Hamilton, Michael Dunn, Doris Roberts, Val Bisoglio, and many others in the cast. We highly recommend this mystery story. A fine, bright and unread copy housed in a clamshell case. There may be a copy as nice as this one, but there is none better!

The Trials Of Rumpole.
JOHN MORTIMER

Man In The Shadow.
HARRY WHITTINGTON