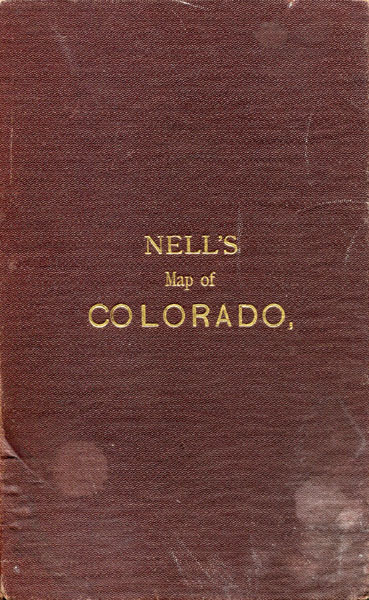 First edition. 11.6 x 18.5 cm [4 9/16" x 7 1/4"] cloth folder with titles stamped in gold gilt on the front cover. The map unfolds to 83.3 x 106.2 cm [32 1/2" x 41 1/2"] and is titled "Topographical Map of the State of Colorado." The map depicts the geographical and topographical details of the state and points out information useful to settlers, miners and travelers. Covers such details as the new mining camps, the latest land office surveys, the lands of the Ute Reservation thrown open to settlement, all modes of transportation such as railroads, roads and practicable mountain trails, U. S. timber reserves, the principal irrigation canals in south-eastern Colorado, and the more important ranches in those parts where villages are scarce. The map exhibits over 2000 altitudes of mountains, passes, railroad stations, and other towns in feet above sea level. Nell offered a succession of maps on Colorado and eventually succeeded Thayer as the most important map maker of Colorado and continued doing so into the early 1900's. Former owner's inked name on inside front cover of the binder and to the verso of the map, cloth lightly soiled and rubbed along the spine panel and extremities, and map has light wear to two fold points. Overall a very good copy.