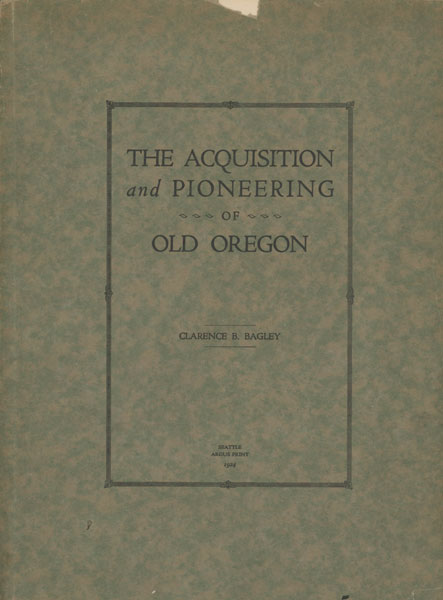 The Acquisition And Pioneering Of Old Oregon

Other works by CLARENCE B BAGLEY

First edition. 12" x 9" in green patterned printed wrappers. 41 [1] entitled The Acquisition and Pioneering of Old Oregon; 17 [1] entitled Pioneer Seattle and Its Founders plus 16 pp. of illustrations, predominately full-page portraits. "In the spring of 1852, Dexter Horton of Princeton, Illinois, with his wife Hannah Eliza (Shoudy) Horton (1828-1871) and daughter Rebecca, joined what became known as the Bethel Company on their journey across the plains to Oregon. Other members of this party who would, like Horton, help establish the city of Seattle, were: Thomas Mercer, his wife Nancy Brigham Mercer (d. 1852) and their four daughters; Rev. Daniel Bagley (1818-1905), his wife Susannah Whipple Bagley and their young son Clarence (1843-1932); Aaron Mercer and his wife Ellen Leonard Mercer; William F. West and his wife Jane Whipple West; Edna Whipple; and about 20 bachelors. After unpacking and resting at The Dalles (the rapids and the town named after them where the Cascade Mountains cross the Columbia River) and after struggling through the Lower Cascades, the party arrived in Salem, capital of Oregon, on September 21, 1852. "Privately printed account of the overland trip with the Bethel Company in 1852, the settlement of Oregon, pioneer Seattle and its founders, etc." - - Soliday I-176. Over-sized wrappers with wear to edges and spine ends. Interior clean.

Colorado Via The Burlington Route [Cover Title]
THE BURLINGTON ROUTE