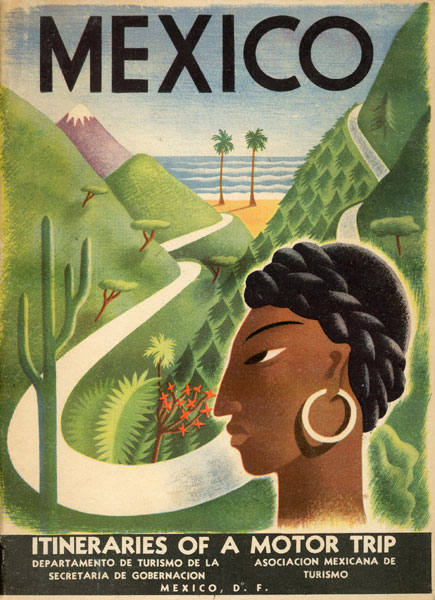 Mexico. Itineraries Of A Motor Trip

First edition. 9" x 6 1/2" in colorful pictorial wrappers. [48] pp. Illustrations. Maps. Printed in sepia & red. General information followed by 16 different illustrated itineraries containing travel advisories, first class hotels, and strip maps. Although undated, the automobiles are primarily the 1940's designs before automakers had made the shift to post-War production, and there is mention of the itinerary from Puebla to Oaxaca that there are no hotels completed on that route as yet because it had just been completed saving many hours of driving time. Itineraries include Laredo to Mexico City; Reynosa to Monterrey; Monterrey to Saltillo and Torreon; Monterrey to Guadalajara; Mexico City; Mexico City to Cuernavaca and Taxco; Mexico City to Merelia, Patzcuaro, and Guadalajara; Mexico City to Tlaxcala, Cholula, and Puebla; Mexico City to Jalapa and Veracruz; Mexico City to San Angel, Desert of the Lions, and Toluca Market; from Mexico City to Guadalupe, Acolman and San Juan Teotihuacan; etc. Chart showing translation of Mexican Road Signs. Laid-in is a strip map travel brochure for the famed roadside stop, the Power's Cafe, from Laredo to Acapulco, with elevations and mileage. Light soiling to wrappers and with light wear to the extremities. Very good. Laid-in strip map is lightly soiled and with creasing. Good.

Billy The Kid, A Handbook
by Jon Tuska