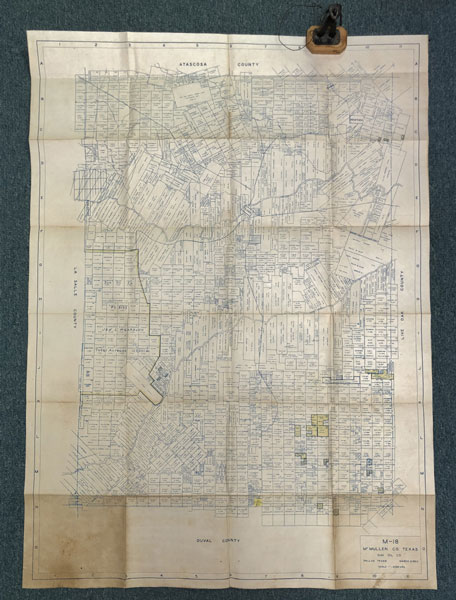 First edition. A large folding map 46 1/2" x 33 1/2" printed one side. A large, unrecorded map that delineates land ownership in 1920 in McMullen County, Texas, south of San Antonio, during the first oil boom in the area. The map was produced for the Sun Oil Company, and properties owned by the firm, including a large swath of land in the western part of the county totaling 127,000 acres, are shaded in yellow. Sun Oil (present day Sunoco) began its operations during the late 19th century in the oil fields of Western Pennsylvania and Ohio, but developed large-scale operations across Texas, beginning with the first discoveries at Spindletop through the early 20th century and beyond, and are still headquartered in Dallas. The first oil producing well in McMullen was drilled around 1917 and a pipeline to San Antonio was completed soon after, as gas and oil took on a leading role in the county's economy. The present map, printed in 1920, provides a detailed snapshot of land ownership in the county at the height of this first boom. Each individual parcel is identified by plat number and is labelled with the name of the owner. The drilling activity during this period tapered off by the Depression, and the economy of the county became ranching-based for much of the 20th century, but the advent of fracking and the location of McMullen County atop the Eagleford Shale has made it the richest county in Texas in recent years. A fine and detailed map, valuable as a document both of land ownership in rural South Texas during the early 20th century and of the development of the Texas oil industry. Not in OCLC. Very light wear along a few folds, some browning at lower edge and a bit more heavily browned at lower right corner, and a bit of scattered faint foxing, else a very good copy.

Brass Checks And Red Lights. Being A Pictorial …
by Fred And Jo Mazzulla