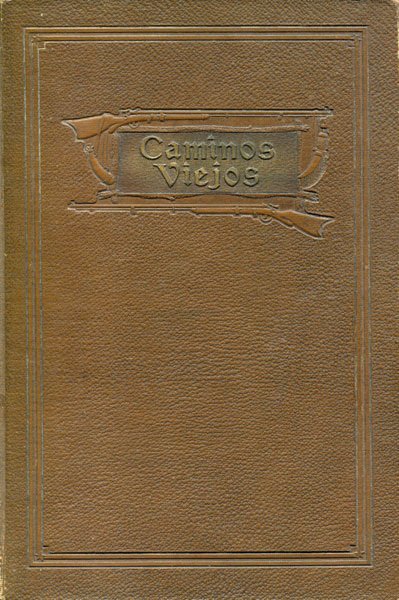 Caminos Viejos. Tales Found In The History Of California Of Especial Interest To Those Who Love The Valleys The Hills And The Canyons Of Orange County, Its Traditions And Its Landmarks

Other works by TERRY E STEPHENSON

First edition. 8vo. Limited to 250 copies of which this is # 239, signed by the printer and the author. Decorated covers and spine, decorated endpapers, frontis., printer's foreword, author's foreword, introduction, maps, illustrated. Illustrated with photographs and with woodcut drawings. Terry E. Stephenson's first book tells tales of the early days of Orange County. Six Guns 2138 says, "Has a long chapter on outlawry in Orange County and tells of the killing of Sheriff Barton and the hanging of Juan Flores." Also chapters on the first settlers, stage coach days, buried treasure, etc. The chapter on Juan Pablo Grijalva and his descendants, José Antonio Yorba and Juan Pablo Peralta, is still a useful summary of the rancho era in Orange County. Particularly well-illustrated with photos, woodcut prints, and the reproduction of three hand-drawn 19th century maps. The book is also notable because the woodcut are a very early collaboration between Arthur Ames and Jean Goodwin, muralists and southern California artists. Former owner's brief inscription, lightly rubbed along edges and to spine ends, else a very good, tight copy.

It Seems Like Only Yesterday: Mining And Mapping …
ROBERT WITH ROBERT AND JUDITH WHITCOMB LENON