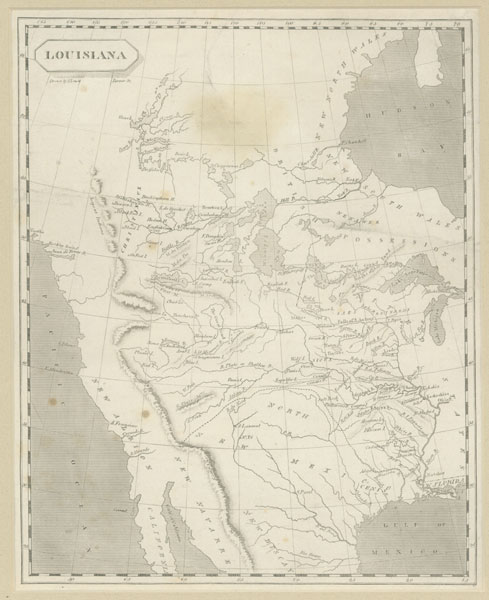 7.625" x 9.5." The classic map of 1804 produced by British cartographer Aaron Arrowsmith and American cartographer, Samuel Lewis (later cartographer for Lewis & Clark's famous map of 1814), and Henry S. Tanner, another major American cartographer. Produced for Arrowsmith and Lewis' famous work, _A New And Elegant General Atlas, Comprising All The New Discoveries To The Present Time_, with 63 maps, published by John Conrad & Co., Philadelphia, 1804. The map covers much of today's North America, from northern Canada to the north central part of Mexico. The eastern extremity includes eastern Hudson Bay southward through today's Michigan to the Gulf of Mexico, and extends westward to the Pacific Ocean. Areas identified on the map include: New North Wings, New South Wales, British Possessions, Nenawek, Christinaux, United States, W. Florida, North New Mexico, New Albion, California, New Navarre, and New Biscay. Natural features include: Pacific Ocean; Hudson Bay; Gulf of Mexico; Gulf of California; various mountain ranges including Mns. de la Roche or Stoney Mns; numerous lakes including Slave Lake, Winnipeg Lake, Lake Superior, and Lake Michigan; and numerous rivers including Churchill River, Assiniboils River, Missouri River, River Plate or Shallow River, Mississippi River, and River del Nord. Native tribes located are Chippiwans, Beaver, Blood, Blackfoot, Assiniboils, Mandane, Aracaris, Poncas, Mahas, Wolf, Sioux, Cansas, Panis, Otos, Republic, Chae, Acjou, Bouchara, Plume, Red, Blue, Arar, Chagutenne, Ayoas, Missouri, Osages, Mentons, Paniasa, Cadodaquis, Panimo, Akansa, and Adays. Several forts and towns or settlements are shown. Of this classic map of "Louisiana"/North America, cartographic scholar, Carl Wheat, in _Mapping The Transmississippi West, 1540-1861_ says: This map is "the most ambitious, and despite its many infirmities, the most informative published attempt to portray the West and Northwest of what is now the United States"..."It is important to recall that when this map was first produced no one yet knew the location of the Mississippi source, much less where the Missouri took its rise, the extent of its major tributaries, the true nature of the Rocky Mountains or the complexities that they encompassed, not to mention the singular character of the Great Basin, or the vast extent of the Columbia and Colorado river systems...West of the Mandan villages all was conjecture"..."Many secondary streams in the Missouri system are named for the first time. Besides the area mentioned in the title, the map shows Central Canada even more fully and correctly than the Missouri Valley." "...the rendering of the Platte and Upper Missouri River basin forms the most important, as well as the most interesting, feature of this map for present purposes"..."it is perhaps the most illuminating statement of the ideas respecting the West that prevailed down to the date of publication of Lewis & Clark's own map" in 1814. With only the slightest of soiling/rubbing, this important map is in near fine condition, and nicely matted for framing.

Letter From The Secretary Of The Territory Of …
S. L SPINK