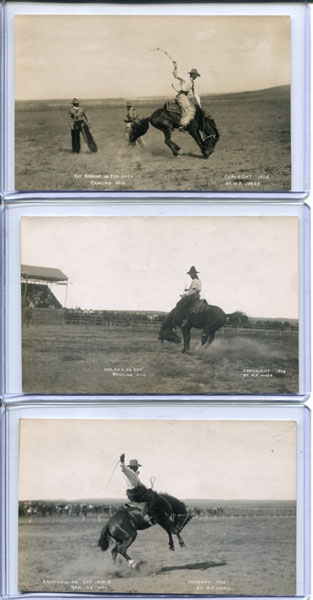 First edition. Fifteen 8.7 x 13.2 cm (3 1/2" x 5 1/2") real photographic postcards which includes one duplicate card, that document Rawlins, Wyoming, rodeo events in 1908-1909. Of the fifteen photographs six are identified as by M. F. Jukes; one is identified as by P. H. Healy; and eight have no identifying names. Fifteen real photograph postcards with all being printed on AZO photograph postcard stock, with split backs and stamp box on the rear. This exceptional group offers an excellent historical record of the Carbon County Rodeo in Rawlins, Wyoming at the beginning of the 20th century. The riders depicted include such noted cowboy performers as Sam Brownell from Iron Mountain, who began performing in the Frontier Days, Cheyenne, Wyoming in 1904; Roy "Skeeter Bill" Robbins (1887-1933) was a tall, active cowboy from Glenrock, Wyoming, who became a professional rodeo performer often performing in the East; and his brother Harry Robbins. Mark Frederick Jukes (1877-1971) immigrated to the United States from Canada at the beginning of the 20th century and established himself as a professional photographer in Rawlins, Wyoming, as well as working for the Rio Grande Railroad, becoming a pioneering photographer of early steam railroads in the West. He would later move his studio to Elko, Nevada by 1920, and by the 1930's had established himself in Bellingham, Washington where he would remain until his death in 1971. See Arnold Arluke, "Beauty and the Beast, Human-Animal Relations Revealed In Real Photo Postcards 1905-1935." A very fine set.

Florida Via The Dixie Flyer Route

Hand Sketches Of The Panama-Canal