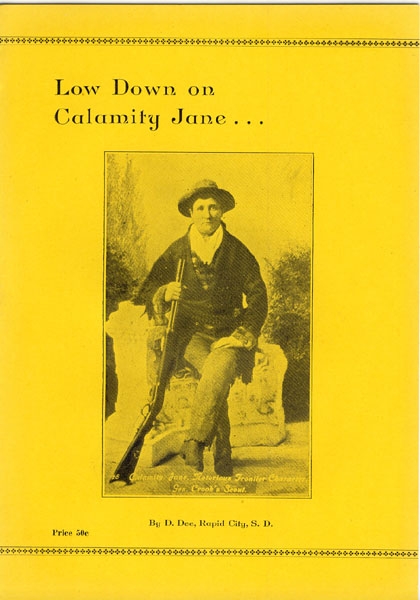 Low Down On Calamity Jane.

First edition. 8vo. Yellow pictorial wrappers, 12 pp. Six Guns 644 says "Rare." "This little pamphlet was written by a woman who claimed to have known Calamity Jane and it is said that she was in a position to know the "seamy side of [Jane's] character" since she was quite a character herself. But, she is unreliable. Established historical facts make many of the statement in her book highly improbable. Although other writers are just as unreliable regarding Jane's birthplace and the date of her birth, this author makes the claim that Jane was born in Fort Laramie, Wyoming, giving the date as 1860 Jane herself says that she was born in Princeton, Missouri, May 1, 1852. The author also says that Jane was "often called Mary Jane Canary (sic), but this was nothing but a nickname. She liked to sing, but her voice was anything but musical, so they called her Canary after the mules, which were also called Rocky Mountain canaries." Fine, bright copy.

Track Of The Cat.
by Nevada. Barr

The Grey Fox. The True Story Of Bill …
by Mark And John Boessenecker Dugan