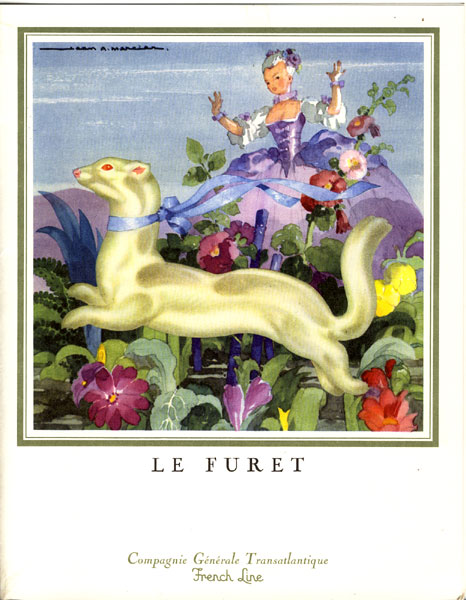 10 1/2" x 8 1/4" with beautiful color artwork by Jean A. Mercier on front cover. Rear cover offers words and music to the song "Le Furet Du Bois Joli," with an illustration of a ferret below the words. The S.S. France was one of the last transatlantic liners. "One area given an unusual amount of attention was the ship's kitchens; 1,500 square meters in area, and placed almost amidships, between the two dining rooms which the one kitchen served. It was thought by the CGT directors that the France would not only display the best in French art and design, but also French cuisine. The kitchens were equipped with the most advanced machinery available, as well as many traditional cooking aides, including a stove that was 12 meters long and 2.5 meters wide. Staffed with 180 of France's best cooks, sauce and pastry chefs, rotisserie cooks, head waiters and wine stewards, this team made the France one of the finest restaurants in the world." This is reflected in the menu offerings. Chef des Cuisines: Ettienne Kraemer. The menu is offered in French on the inside of the front page; the menu is offered in English on the facing page. Tiny bump to lower corner and with light soiling to front cover. A wonderful menu with cover art that is highly collected.

Through Rates Of Fare From Council Bluffs And …
J. P. Mertlik [Compiler]