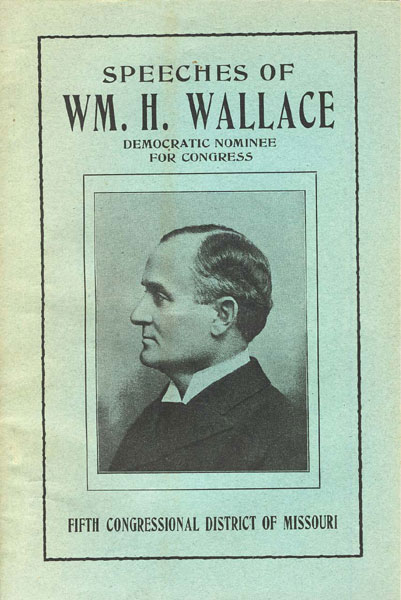 Other works by WM. H. WALLACE

Later edition. 22cm. Light green pictorial wrappers. 96 pp. Prior to and directly after running for a seat in the Senate, Wm. Wallace held the office of prosecuting attorney of Jackson County, Missouri. Included are 8 speeches given by Wallace that include "The Law and the Bandit," from a closing speech in the prosecution of Wm. Ryan, one of the James boys; "Frank James Speech," from the trail of Frank James for murder; "Argument Against the Trust," made at Hanibal, Missouri in 1902; "A Plea for Good Government," a speech made in nominating Governor Folk; "McKinley Memorial Address," the address at memorial exercises of President McKinley; "The Missouri River," the speech on the improvement of the Missouri River, tariff revision and other issues, made at Turner Hall, September 14, 1906; "Grand Old Missouri," from an address at Macon City, Missouri; and "Duty of Avoiding Resentment," from a speech at Lone Jack, Missouri. Very light tanning to edges of both wrappers, else a fine copy.

Among The Rockies. Pictures Of Magnificent Scenes In …