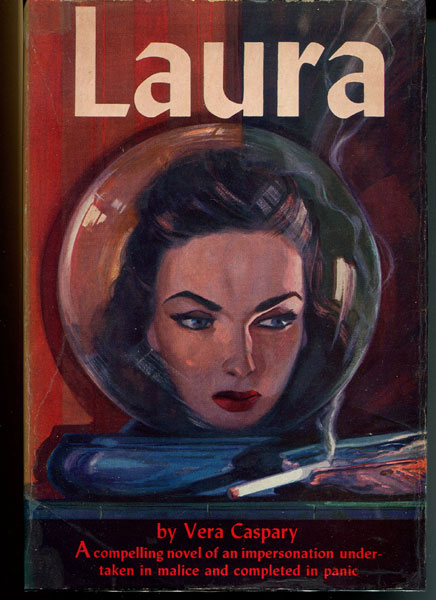 First edition. Original blue cloth, titles in red on front cover and spine. Faint evidence of bookplate removal from the front free fly leaf, else a near fine, bright copy in a lightly restored dust jacket that is sunned on the spine and with minor wear to top and bottom edges of the rear cover panel. This book is the author's first mystery and a Haycraft/Queen mystery title. The story opens and Laura's life is ended ... killed in the doorway of her apartment with a shotgun blast that obliterated her face. Three men who knew her best tell the story. Some of it is told by the newspaper columnist, some by her fiance, and most by the detective involved in the case. Laura Hunt was the ideal modern woman: beautiful, elegant, highly ambitious, and utterly mysterious. No man could resist her charms—not even hard-boiled NYPD Detective Mark McPherson, who was sent to investigate the murder. As McPherson investigates the mystery of Laura’s death, he becomes obsessed with her strange power. He soon realizes he’s been seduced by a dead woman ..... or has he? The story is told on screen in 1944 by Twentieth Century-Fox using the title "Laura" and directed by Otto Preminger. The cast starred Gene Tierney, Dana Andrews, Clifton Webb, Vincent Price, and Judith Anderson. Housed in a cloth clamshell case with the front cover of the dust jacket duplicated on the front cover of the case and the titles stamped in white on the spine.

The Apostrophe Thief. A Mystery With Marian Larch.
by Barbara. Paul

The Pale Ape And Other Pulses.
by M.P. Shiel