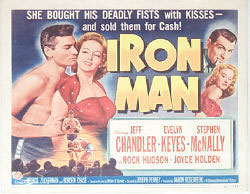 Large horizontal format half-sheet size poster (11x14) from the original U.S. release of the 1951 film adaptation of this boxing novel by the author of Little Caesar and The Asphalt Jungle. The movie starred Jeff Chandler, Stephen McNally, Evelyn Keyes, Rock Hudson, and Joyce Holden, four of whom are depicted on this colorful poster, which includes a small vignette of a prize-ring scene. Near fine copy.

Underneath Every Stone.
by Paula. Gosling

The Case Of The Second Chance
by Christopher. Bush

The Crime Of My Life - Favorite Stories …
Brian Garfield [Edited By]