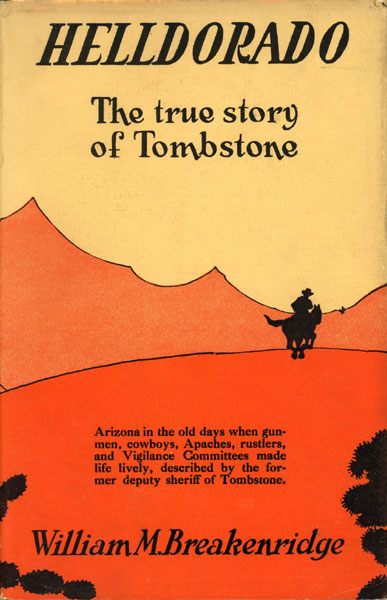 Helldorado. Bringing The Law To The Mesquite.

First edition. 8vo. Brown cloth, xix [1], 256 pp., frontispiece [photograph of Breakenbridge], note, introduction, illustrated, plates. Introduction by William MacLeod Raine. At the age of 16, Breakenridge joined the United States Army, eventually serving under Colonel John Chivington with the Colorado Territorial Militia during the Sand Creek Massacre. Afterward, he moved on to Arizona, eventually ending up in Phoenix where he became a Maricopa County deputy sheriff. He arrived in Tombstone before the Earps, and he served as a deputy sheriff under Cochise County Sheriff Behan during the 1880s including before and after the gunfight at the O.K. Corral. After leaving Tombstone shortly after the gunfight at the OK Corral, Breakenridge later served as a deputy U.S. marshal, a surveyor, and as a claims agent for the Southern Pacific Railroad. Adams 150 #17 says, "A very interesting book about Tombstone, Arizona, in its wild days. The book has an important place in the early history of Tombstone." "Arizona in the old days when gunmen, cowboys, Apaches, rustlers, and Vigilance Committees made life lively, described by the former deputy sheriff of Tombstone." Former owner's neat, inked name at top of front free, fly leaf, else a fine, bright copy in the original, fine, bright dust jacket. You may have seen a copy as good as this one, but there is none better!