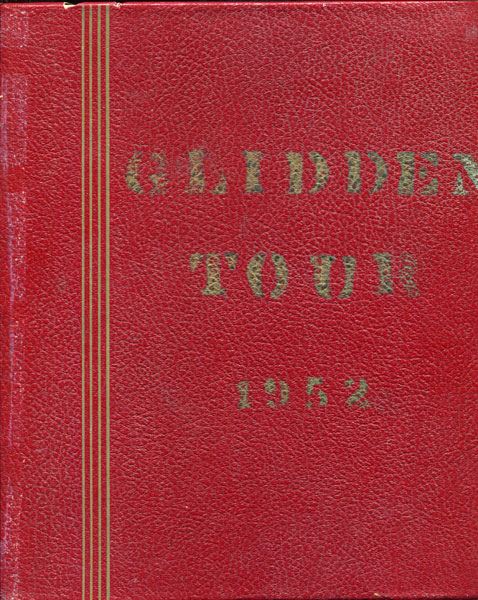 Multi-ring photograph album with 72 8" x 10" original silver gelatin photos vividly presenting many of the 192 Brass Era and other vintage automobiles which participated in the Veteran Motor Club of America 225 mile antique car race between Washington, D.C. and Harrisburg, PA. in 1952. With 72 original silver gelatin black &white photographs (8 x 10 inches) inserted into 36 Mylar sleeves, w/black paper separation leaves, a couple with pencil annotations on the versos, and a few at the end with automobiles indicated in red ink at the lowest fore-edge of the photo. Original red padded leather 20-ring binder album, gilt lettering stamped on front cover, This unique souvenir photograph album for the 1952 Glidden Tour provides fantastic images and documentation for over 70 of the Brass Era, and Classic autos which participated in the tour, as well as a few images of some of the cars exhibited in the Melton Museum in Norwalk, CT, which was open from 1948-1953. The Glidden tours were initially organized in 1904 by the American Automobile Association to promote safer roads, and to demonstrate the reliability of the early automobiles, and the Trophy was named after Charles J. Glidden, an early automobile enthusiast and financier. The tours were grueling events, cars broke down, had accidents, and the roads were often nearly impassable. They were revived in 1946 after World War II by the Veteran Motor Car Club of America, with James Melton as Chairmen, and the tour ran 850 miles through Albany, Buffalo, Detroit, Cleveland, and Columbia, with 50 cars participating. The photographs in this album from the 1952 tour depict Melton's 1907 Rolls Royce Silver Ghost, thought to be the first ever shipped to the United States; a well as many other automobiles, including such cars as a 1915 Pierce Arrow, a 1911 Ford Model T, a 1909 Ford Model T truck, a 1911 Winton, William Pollack's famed 1910 Chadwick Great Six Runabout, a 1911 Packard, a 1910 Thomas Flyer, a 1913 Hupmobile, a 1906 Mercedes, and other classic Brass Era autos such as Oaklands, Stanley Steamers, Warrens, and Willys-Overlands. Although this album provides a splendid visual record of many of the participants in the 1952 Glidden Tour, it also offers an historic record of many of the 1940s and 1950s automobiles on the road as well which are often driving behind, or parked to the side of the racing autos. Melton (1904-1961) was an accomplished tenor who sang with the New York Metropolitan Opera, went on tour with George Gershwin in 1934, and performed for the Firestone Hour, The Palmolive Beauty Box Theater, Bell Telephone Hour, and Texaco Star Theater, as well as the Jack Benny radio show. Melton began the tradition of singing "Back Home Again in Indiana" at the Indy 500 in 1946, and was an avid antique automobile collector first opening his museum in Connecticut, and then the Melton Autorama in Florida, which also featured a giant cyclorama, "America the Beautiful." After his death, the museum closed and the collection was sold off, although most of his treasured automobiles continue to be preserved and restored by collectors. See: Margo Melton Nutt, James Melton: The Tenor of His Times (2013); Margo Nutt, Flashback: The Melton Auto Museum Opened in Norwalk, Connecticut on July 24, 1948, New England Auto Museum (2016); The Great Chadwick "Six" Runabout, Vintage Motoring on the Road with a Second Generation Car Guy (2013); Robert H. Brown, James Melton Autorama, Florida's Lost Tourist Attractions (2011). The album is lightly rubbed and has a few minor bumps and bruises to the edges, else very good, tight and serviceable. The photographs are in fine condition.

Railroads In Alaska. Letter From The Secretary Of …
by James Rudolph Garfield

Clifton And The Cliff Mine
by Clarence J. Monette