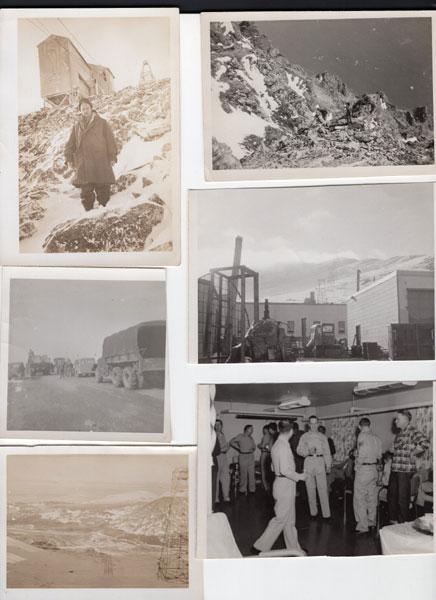 Collection Of Original Vernacular Photographs, Some Annotated, Depicting Daily Life At An Alaskan Air Force Base During The Cold War

Eighty-nine photographs, 3½ x 5 inches or smaller. A unique grouping of original images memorializing Elmendorf Air Force Base in Anchorage during the time when the Alaskan Air Command was building an early warning system against Soviet missile attacks. The photographs show quite a lot of the base, numerous officers and soldiers, the icy vistas around the base, storage huts, the dining hall at Christmas, and much more. Some officers are identified in the handwritten captions, including Forness, Gilman, McCanly, Dart, Baker, Jones, McNeil, Reece, and others. On the verso of one photograph, the photographer identifies eleven officers and their rank or division. Several photographs show men on electricity towers, including the photographer, who identifies himself in one photo climbing up one of the massive structures. The Alaskan Air Command was moved to Elmendorf Air Force Base on Oct. 1, 1946. The unit worked to create a defensive system against potential Soviet attacks after the Cold War began in the late 1940s. It is perhaps some of this work which is shown in the present collection of photographs, specifically the electrical work and some mention of civilian contractors around the base. Alaska would prove an important strategic location for the United States during the Cold War. Minor surface wear with some fading, else overall a very good collection.

Selections From The Youth's Companion For Supplementary Reading. …
The Youth'S Companion

The Frolie Grasshopper Circus
by The American Cereal Company

Out Of Doors In Colorado
Colorado And Southern Railway